Turin was not the only Piedmontese site for aeronautical activities; the following are also worthy of note: 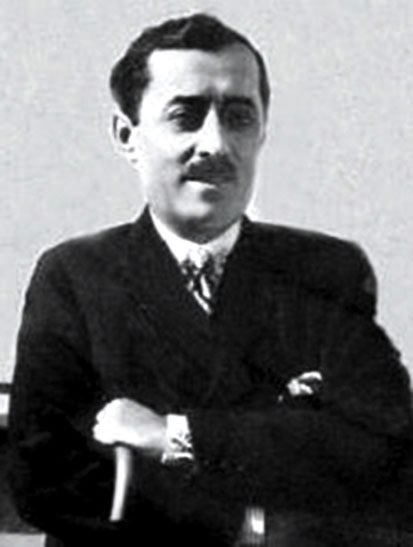 He returned to Italy in 1912, and with the financial support of the cousins Angiolina and Guido Carbone began the construction of a factory to produce his monoplane (called “Gabarda”) both in a land-based and in a seaplane version under the name of “Gabardini Aircraft Construction and flying school - Cameri Aerodrome”.
In March 1913 the “Gabarda” was successfully tested for the first time at Milan-Taliedo, piloted by Paolucci.
The start of production coincided (thanks to financial support from the Carbone cousins) with the acquisition of land between Cameri and Bellinzago for the expansion of the existing aerodrome, intended for the testing of the aircraft. The aerodrome, having obtained the necessary permissions from the dtam, was opened in September 1913.

Filippo Cevasco, the company’s official test pilot, oversaw the development and was the author of some exceptional exploits that provided confirmation of the quality of the aircraft. 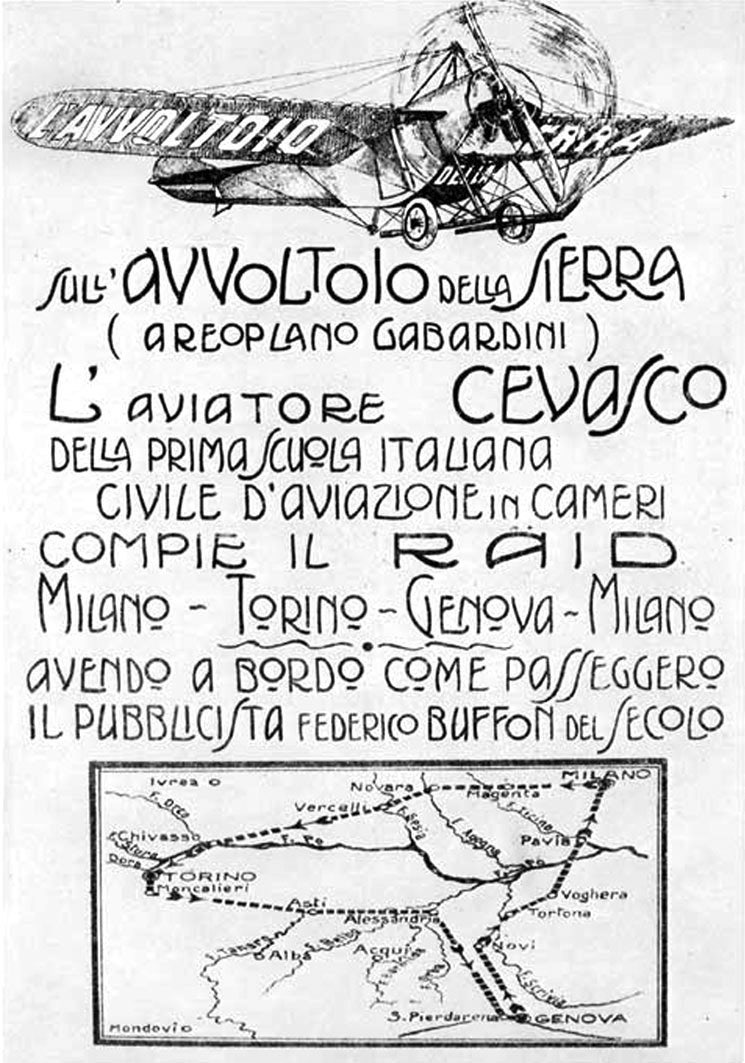 On July 13, 1913 Cevasco performed a Milan-Turin flight with three passengers on board and a few days later he repeated the feat, going from Milan to Venice, again with 3 passengers.
In October of that year Gabardini transformed his personal aircraft into a seaplane by installing a pair of floats. In December, Cevasco made a flight in the “Gabardini-idro” from Sesto Calende to Rome with stops at Genoa and Livorno. The entire Italian press gave great prominence to the happy outcome of the event. 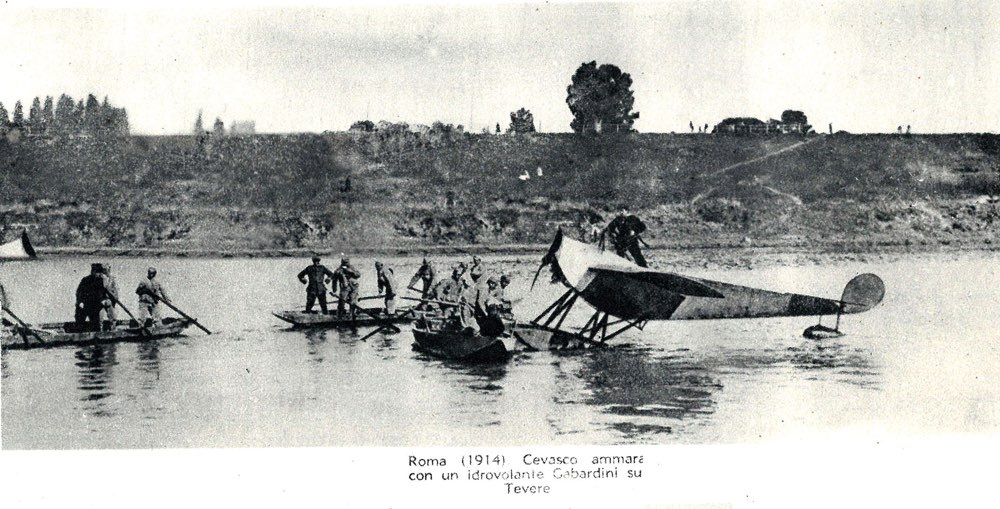 In 1913 a flying school was again opened at Cameri aerodrome, and its first brevet was awarded on December 2 of that year.

The tuition activity was consolidated and enlarged to allow for the training of a large number of students.

According to official numbers made available by Gabardini, from its inception up until 1922 the school qualified about 1,500 students, including Natale Palli, who took part in the historic flight over Vienna with D’Annunzio, Renato Donati, Gianni Ancillotto, Arturo Ferrarin, the Genoese Ciro Cirri, Achille Landini, Giuseppe Lampugnani, employing over 200 aircraft, enabling them to set a record of 131 pilots qualified in a single month. 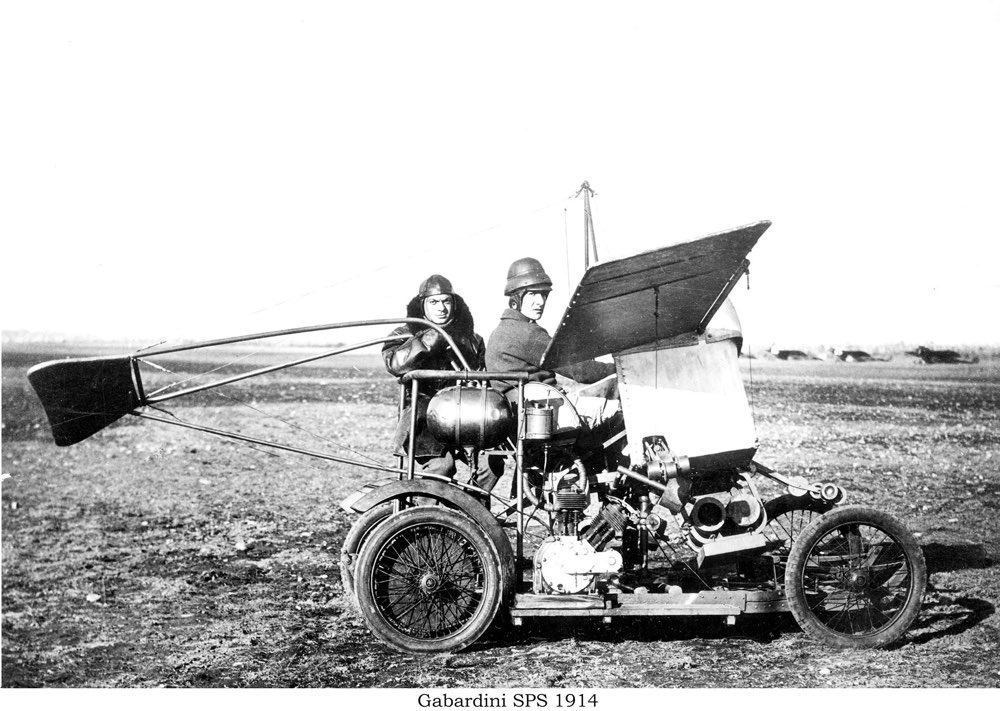 Gabardini was somewhat prone to exaggerate, and declared that Cameri was the largest flying school in the world, supporting his statement with images, which today appear to have been artfully retouched, showing a greater number of aircraft than that genuinely available.

Meanwhile, the production of aircraft continued to grow and some examples were exported to Argentina.

On 24 July 1914, one of his aircraft (Landini pilot, passenger Professor Lampugnani) starting from Cameri, flew over Monte Rosa at an altitude of 4,300 meters, landing at Viege in Switzerland. 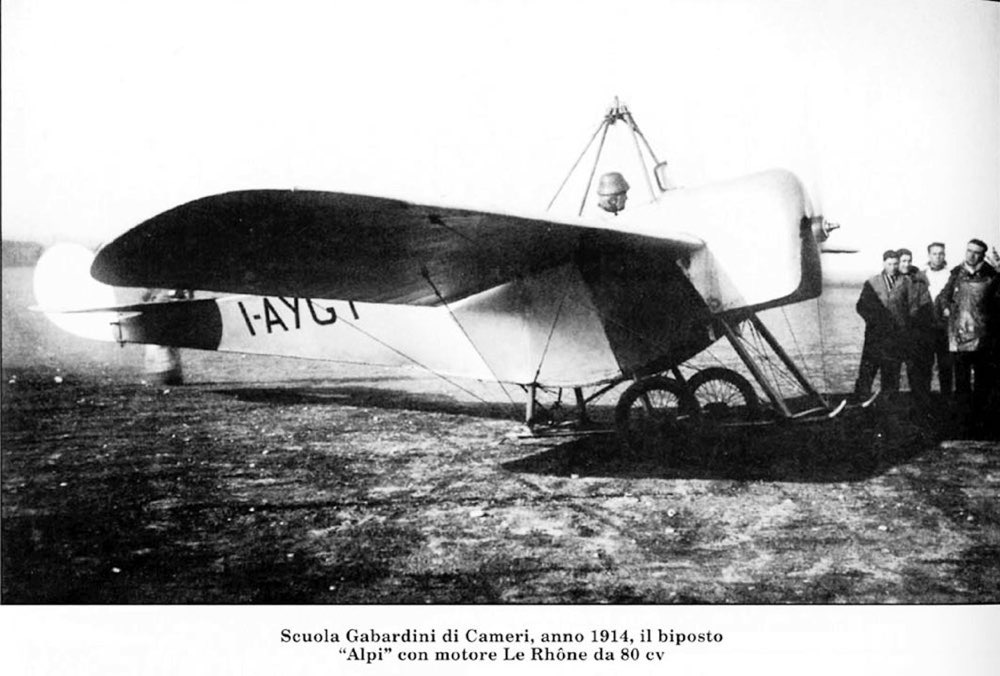 Unfortunately, this exploit received little consequence since it occurred on the day immediately before Austria declared war on Serbia, with all that which followed.

With the outbreak of the 1st World War on July 25, 1914 with the declaration of war on Serbia by the Austro-Hungarian Empire, Gabardini turned his attention to military affairs and devoted all his efforts to the production of trainer aircrafts for military pilots. 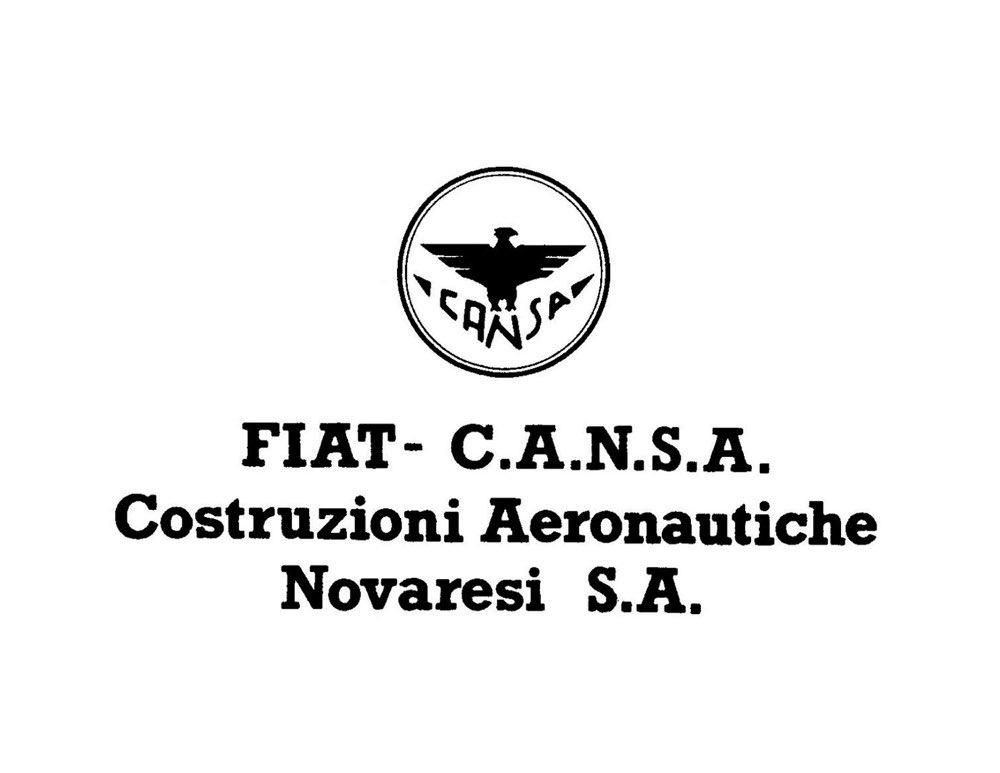 He experimented with various types of engines, starting with the 80 hp Gnôme followed by the Anzani 30 hp and then to the 50 hp Gnôme before finally adopting the luct 70 hp. 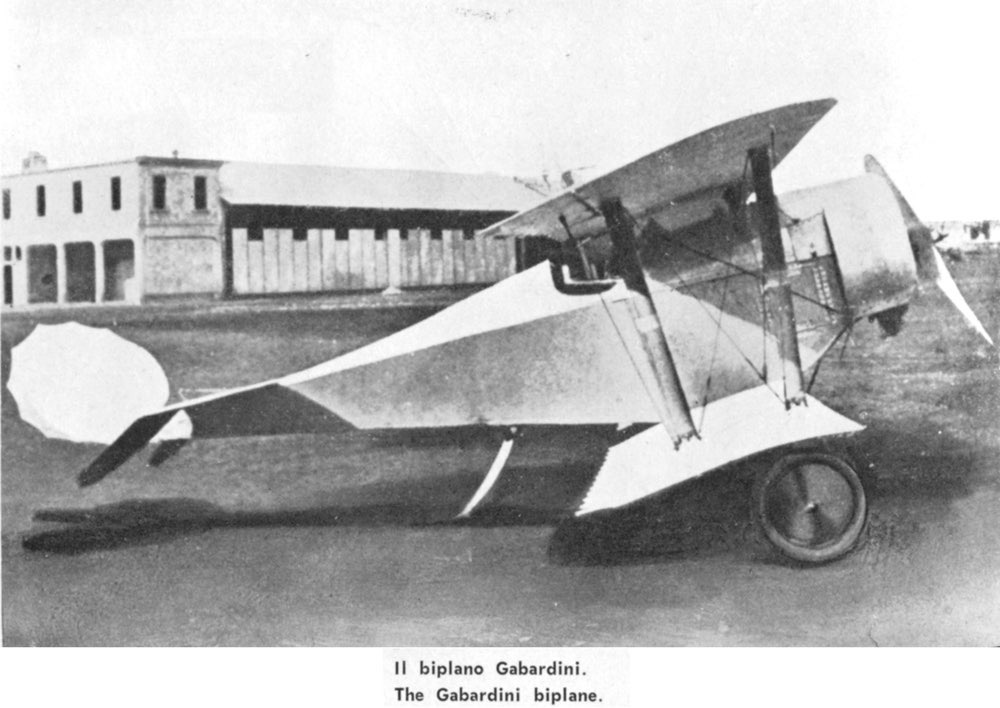 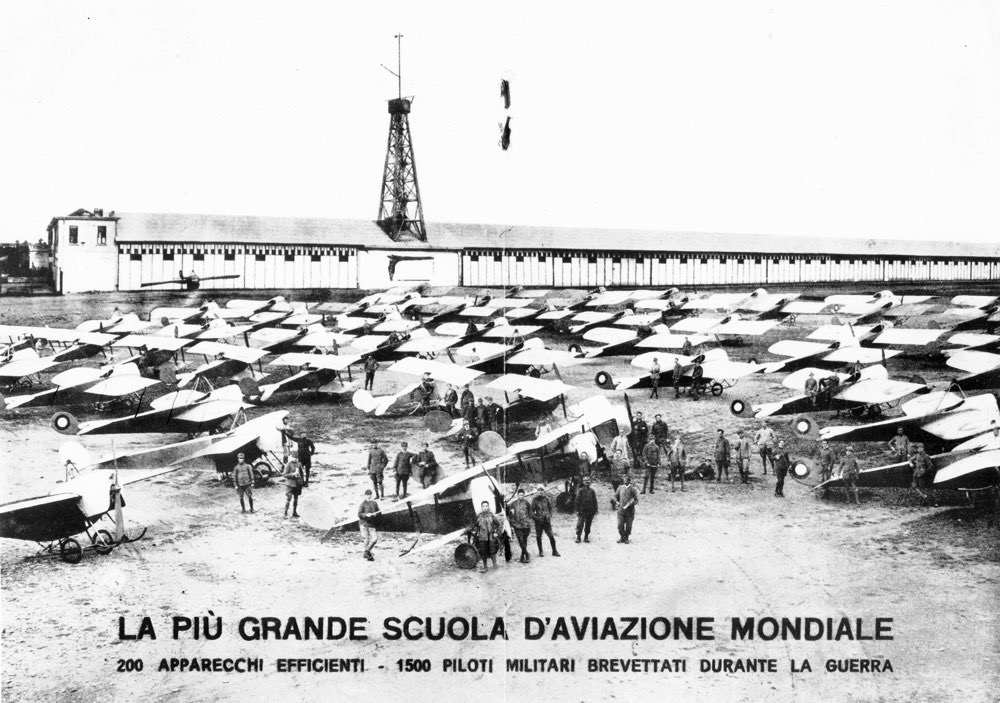 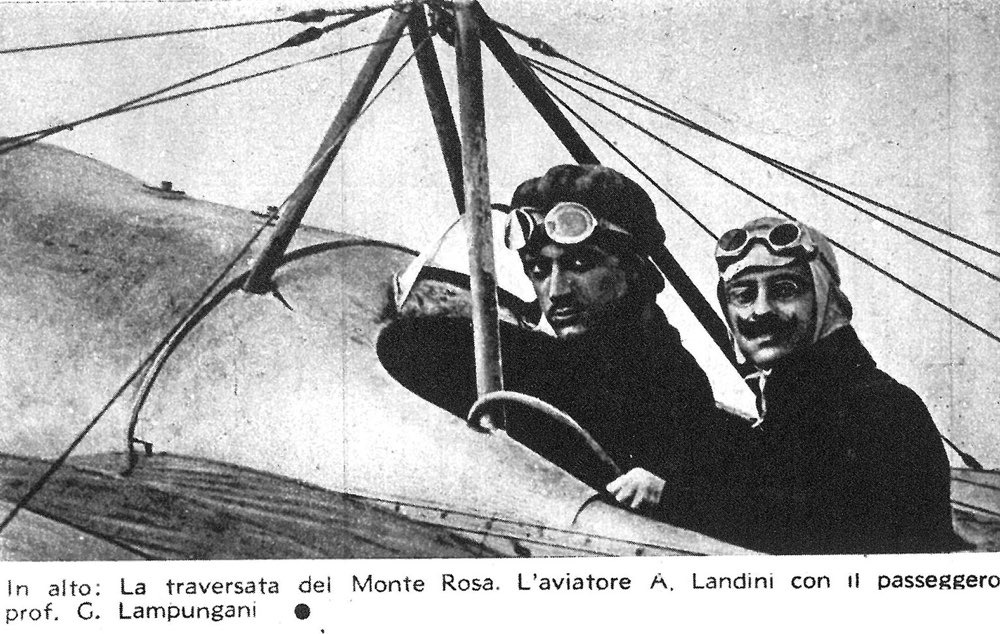 During the wartime period, Gabardini came to employ more than 1,100 people.After the war Gabardini turned into cansa (Costruzioni Aeronautiche Novaresi sa) which was later purchased by fiat, becoming fiat-cansa.

Giuseppe Gabardini died on January 9, 1936 in Galliate (Novara) following a car accident on the Turin-Milan highway.

In 1913, the Ministry of War promulgated a “Competition for Military Aircraft”, covering both the aircraft and aviation engines.
23 aircraft, including two Bobba monoplanes, one with an 80 hp and one with a 160 hp engine, passed the preliminary tests at Mirafiori aerodrome and went on to the final test, a 300 km Turin-Milan-Casale-Turin crosscountry.
This took place on May 9, 1913 and was won by the Bobba monoplane with the 80 hp Gnôme engine, piloted by Giuseppe Rossi.
The victory was clear, and according to the competition rules, Bobba should have been awarded a contract for the construction of at least 10 examples, but the order never came.
Angered by this injustice, Bobba closed his business and returned to France. 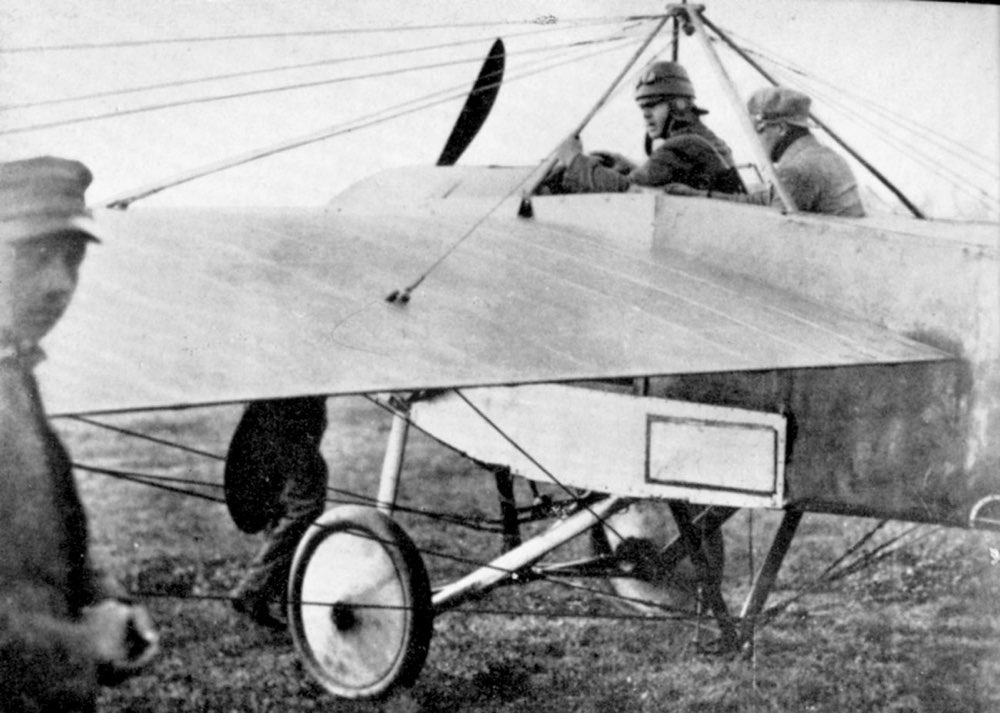 In October 1909, once again in Cameri (Novara), two Engineers, the Frenchman Clovis Thouvenot and the Italian Gino Galli, with the technical collaboration of the Turinese car champion Alessandro Umberto Cagno, set up the Avis company to build Voisin aircraft under licence. Voisin had been producing aircraft since 1906.
This initiative by Engineer Thouvenot led to the development of the airfield of Cameri, inaugurated on 28 July, 1910. 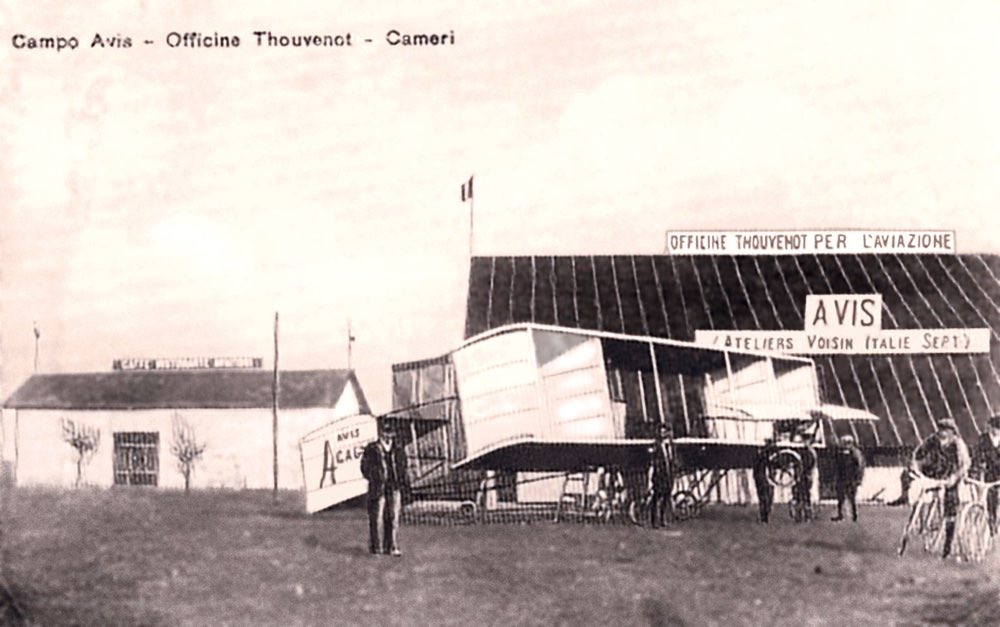