Between 1908 and the start of the First World War a number of engine manufacturers were active: 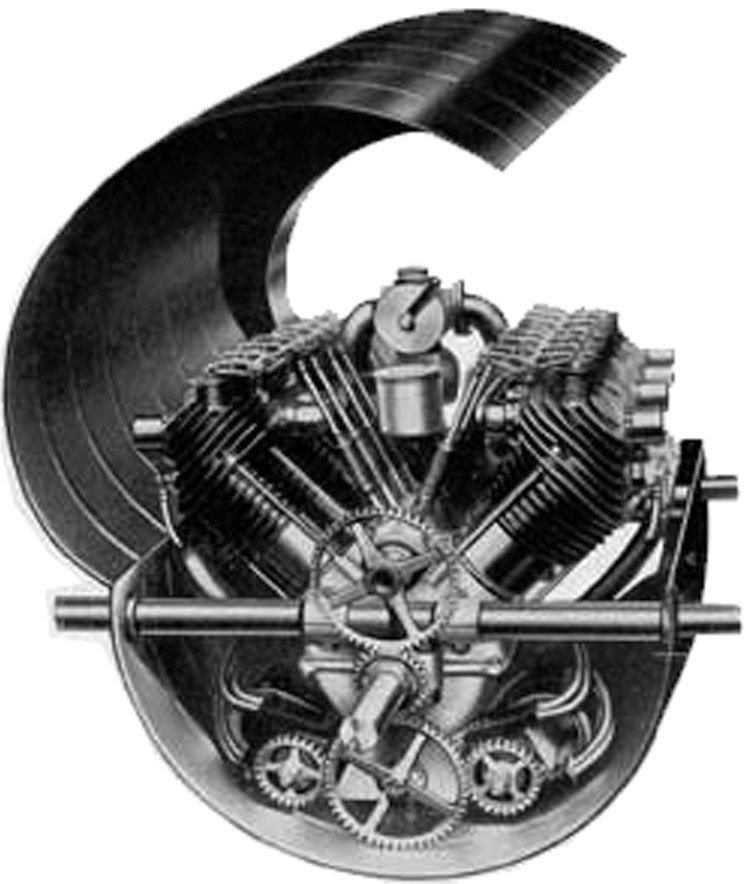 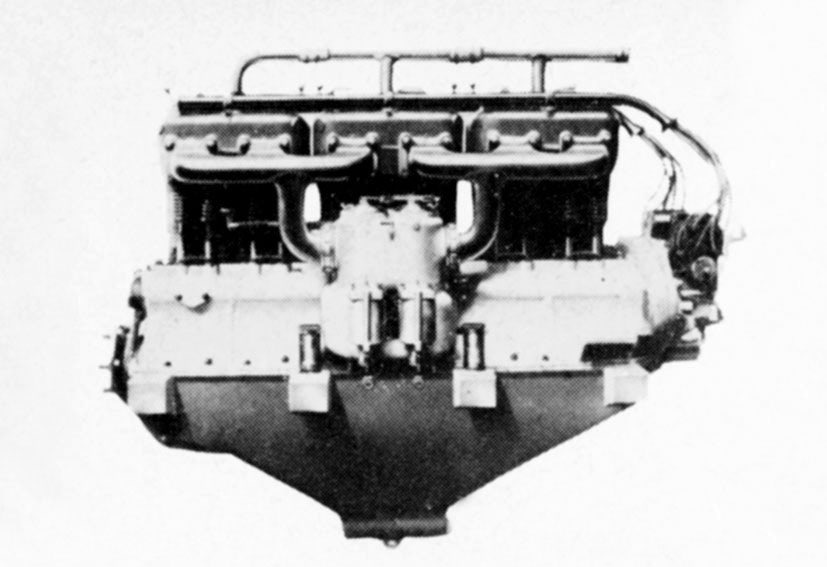 Founded in 1906 by Michele Ansaldi and Matteo Ceirano (not to be confused with his brother Giovanni Battista, founder of the well-known “Ceirano” car company) spa counted among its collaborators Engineer Aristide Faccioli (see p. 17) who convinced Ceirano of the importance of aeronautical science that was currently emerging all across Europe. 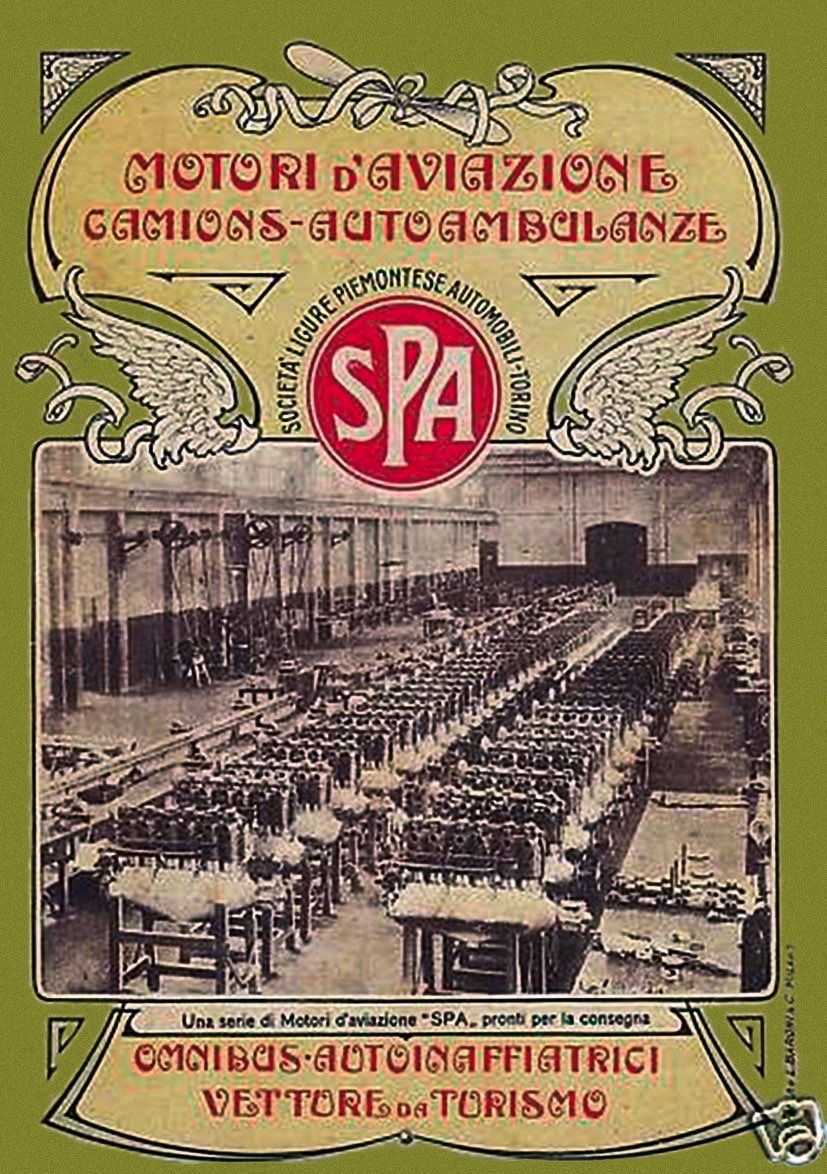 Thus, beginning from 1908, a series of aviation engine designs were built, starting from those used by Faccioli to power his four versions, namely the 80 hp “Faccioli 1” 4-cylinder, 8-piston engine, the 25 hp “Faccioli 2” single cylinder with two pistons, the 50 hp “Faccioli 3” 8-cylinder 8-piston, and the “Faccioli 4” an 8-cylinder 8-piston engine of 80/100 hp.
Spa also produced an 80 hp, 10-cylinder fixed star engine, and a water-cooled 8-cylinder 100 hp “V” and an in-line 6-cylinder 205 hp engine, both of which were water cooled.
Spa’s engine-building activities also extended into the field of engines for airships, and in 1908 they produced a 35/40 hp 4-cylinder water-cooled engine mounted by Count Almerico da Schio on the airship “Italy”.
Spa was therefore the Italian company which built, not only the first aircraft engine, but also the first airship engine, both of which were actually tested in flight.
In 1909-1910 a 35/40 hp engine was produced and installed on Nico Piccoli’s airship “Ausonia” followed by an 80/100 hp four-cylinder, which like its predecessors was water-cooled. This was installed on the Usuelli-Borsalino airship built by the Miller Workshops.
In 1916, spa produced the engine that became one of the most famous in the aviation italian world of the time, the spa 6a of 220/230 hp, initially installed on the sva built by Engineers Savoy and Verduzio and then, during the war, produced on a large scale in over 3,000 units.
The spa 6a engines, installed in the famous sva biplanes (Savoia Verduzio Ansaldo), were protagonists of D’Annunzio’s flight over Vienna in 1918 and the Rome-Tokyo flight by Arturo Ferrarin in 1920, as well as countless aerospace exploits worldwide in the postwar period.
At the end of the war, spa almost completely stopped production of engines for aviation and was later taken over by fiat.

The Itala 65 hp was thus almost certainly the first Italian aircraft engine installed in a foreign aircraft. During the years of the Great War, Itala licence-built the 150, 180, 200 and 220 hp Hispano-Suiza engines mounted in the spad (Societé Pour les Avions Deperdussin) fighters used by almost all the Allied Air Aces, including that of the renowned Italian ace Francesco Baracca. 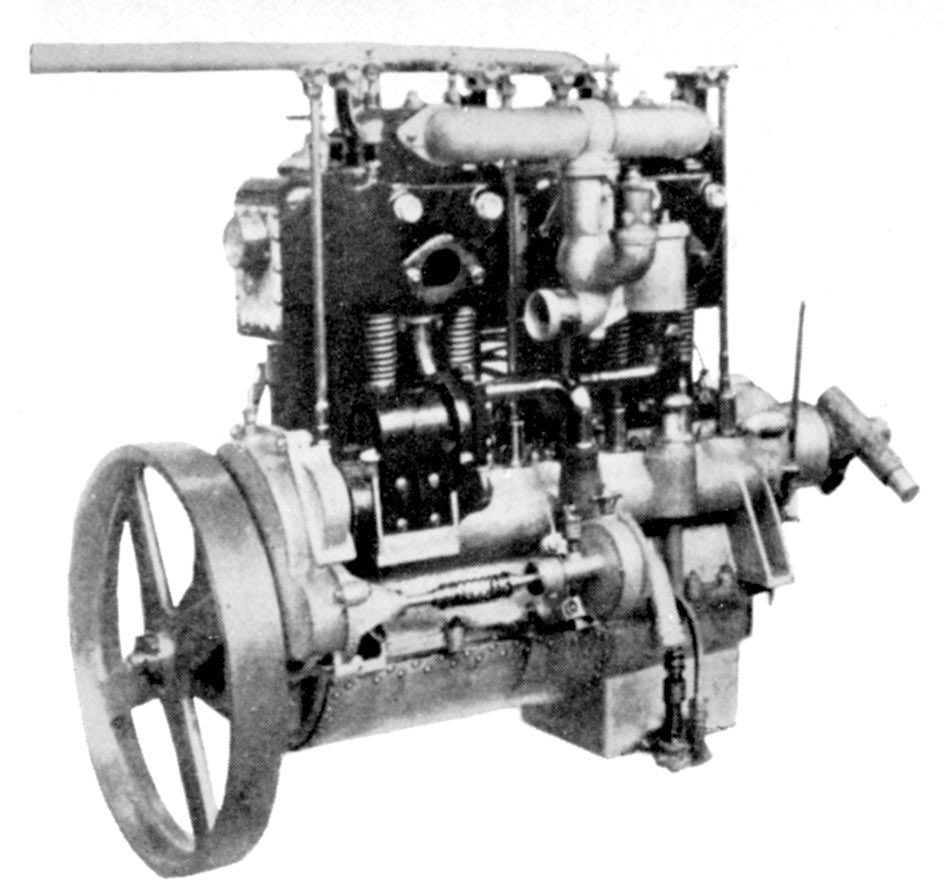 The Itala 65 hp was thus almost certainly the first Italian aircraft engine installed in a foreign aircraft. During the years of the Great War, Itala licence-built the 150, 180, 200 and 220 hp Hispano-Suiza engines mounted in the spad (Societé Pour les Avions Deperdussin) fighters used by almost all the Allied Air Aces, including that of the renowned Italian ace Francesco Baracca.

It would be the only Italian rotary engine capable of competing with the well-known “Gnôme”.
This engine, installed on a Farman, allowed the pilot, Mario Cobianchi, to set an Italian record with a flight lasting 2h 18’ 40” on August 16, 1912 at Mirafiori. 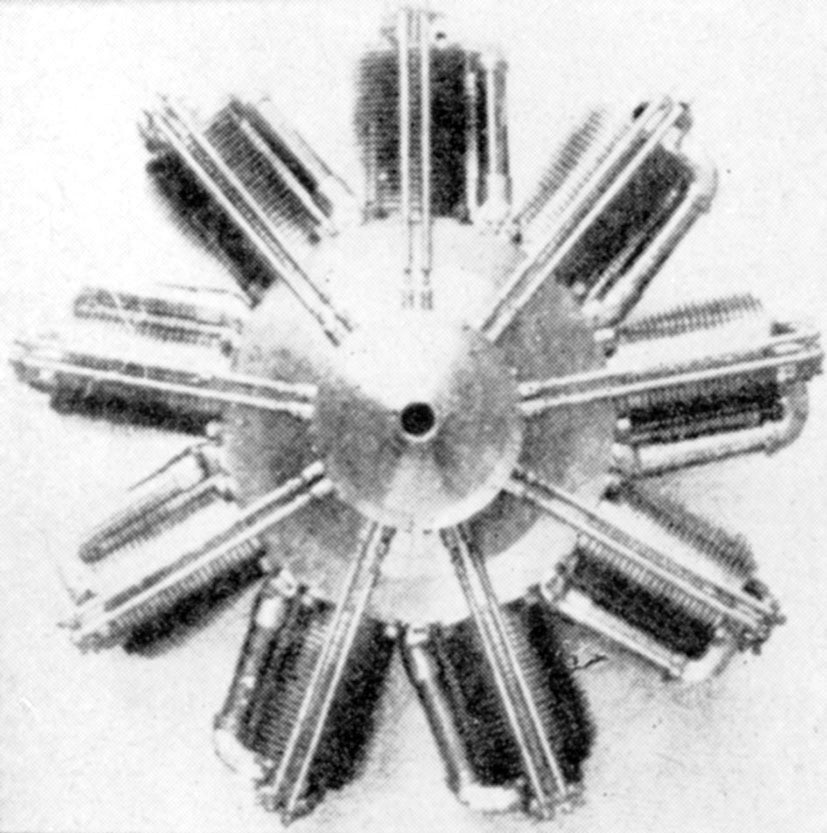 Luct then went on to produce a series of 80/100 hp 9-cylinder rotary engines.
The curious pecularities of luct engines were that although they had two valves for each cylinder, these were operated by a single cam and the operating cycle was 6-stroke, since two strokes were used as cleaning strokes to improve internal engine cooling.
The engine was later installed on an Asteria 4 and officially presented to the technicians of the Aviation Battalion of Turin hoping to get an order from the military, but without success.
At the Air Force Exposition of May 1913, held in Turin, luct presented three types of engines, of 50, 80, and 100 hp with good results. Among others, they succeeded in obtaining several orders for 80 hp engines which were exported to Brazil for installation in the aircraft “Enea Bossi” and “Wolsit Jacchia”. Despite this, however, the company was wound up and ceased production in 1915. 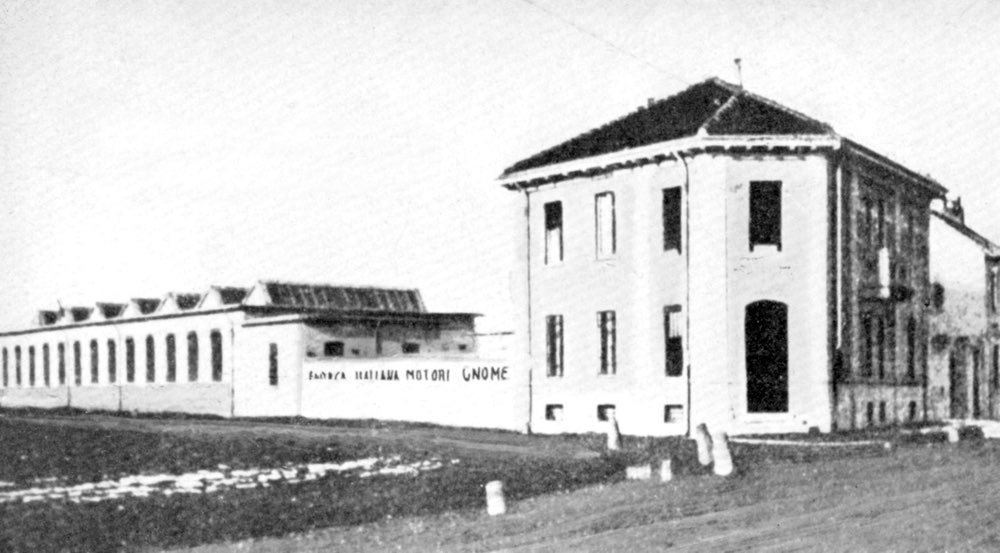 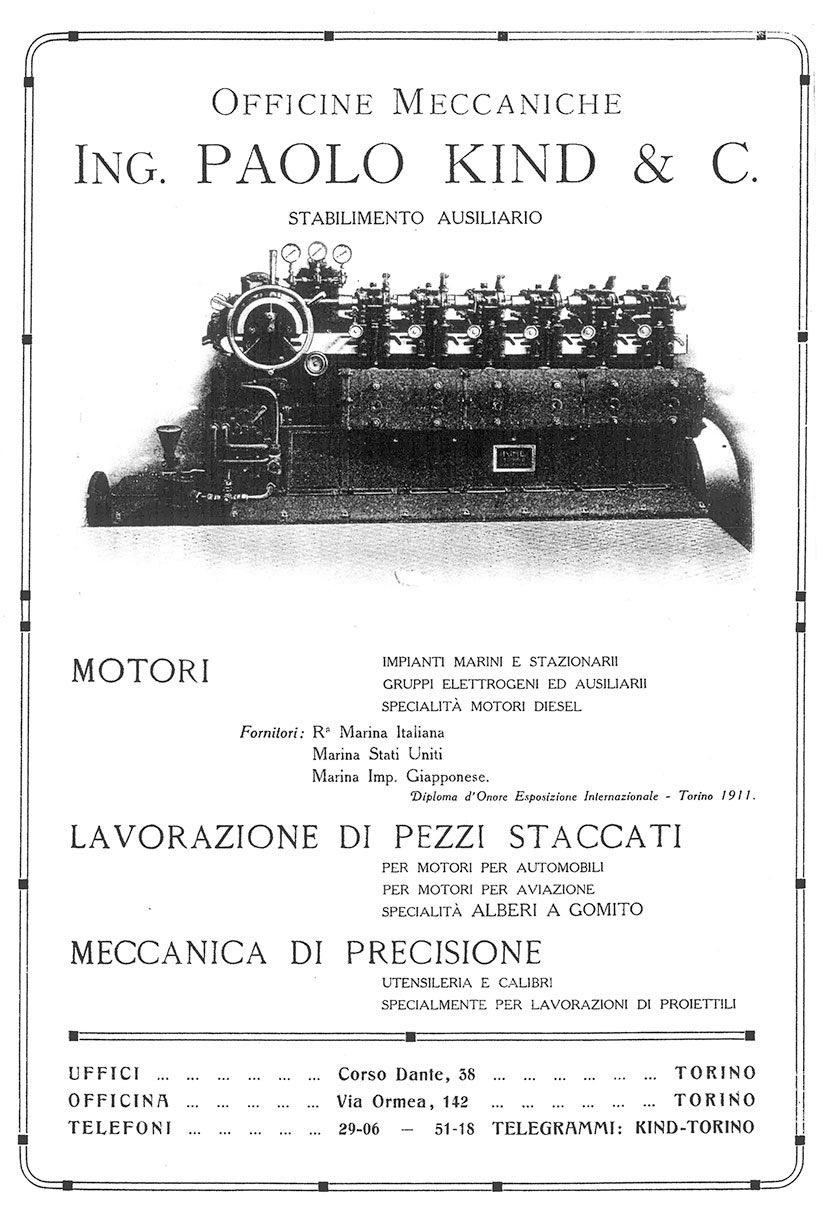 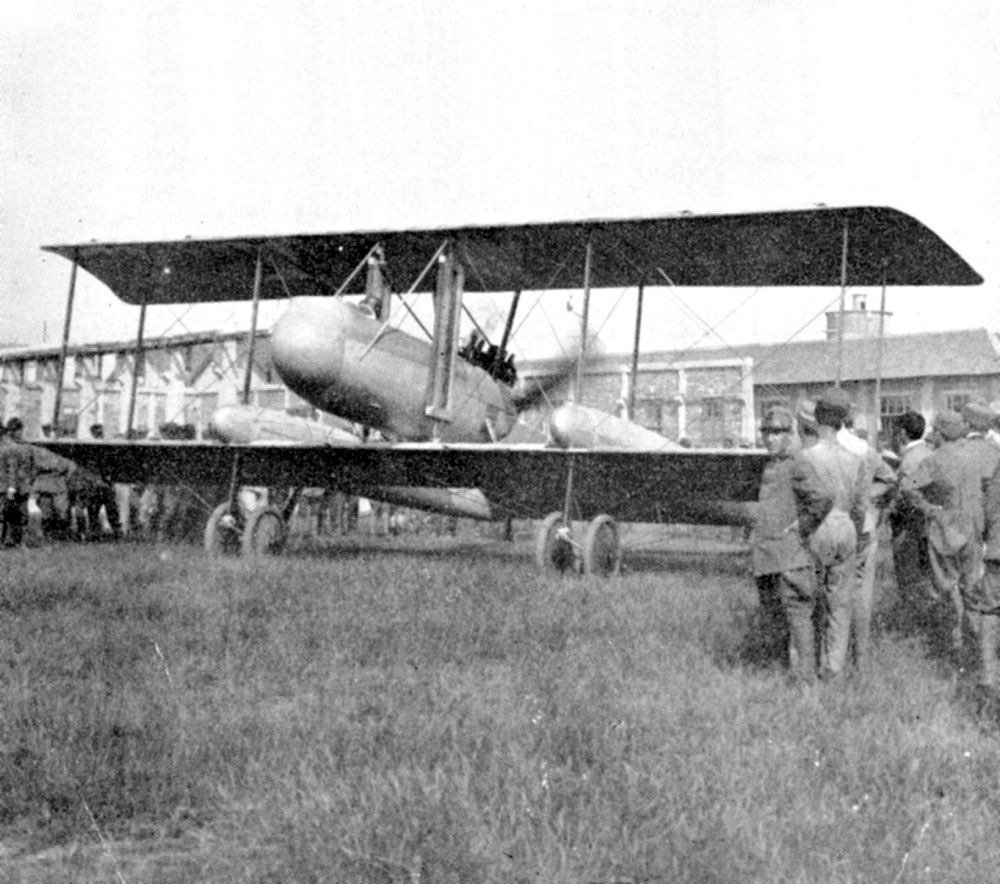