Between 1909 and 1914 in addition to Miller’s enterprise, a number of new aircraft construction companies sprang up. Among those we find:

Antonio Chiribiri, a mechanical engineer from Venice, transferred to Turin in search of fortune in the starting automobile industry. After employment in various workshops, he was hired by the Miller enterprise where he became chief mechanic, with responsibility for the construction of a number of prototypes of engines, into which he introduced mechanical details of his own invention. 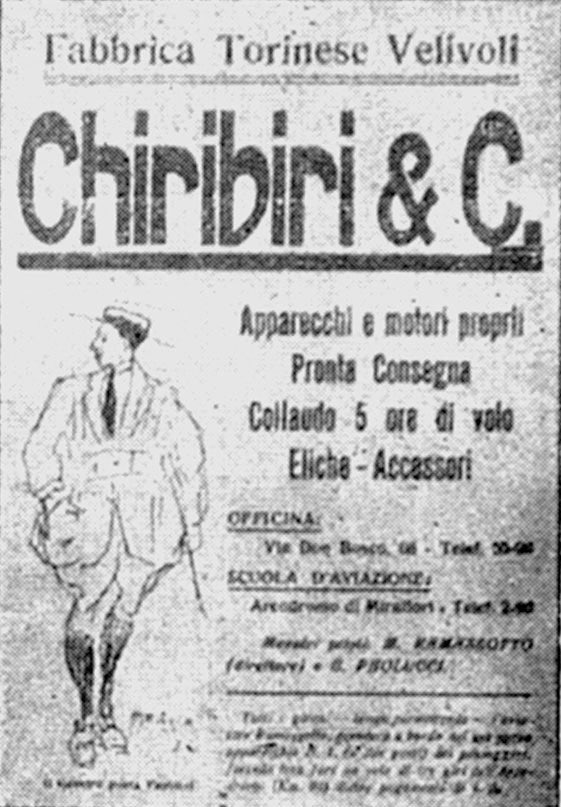 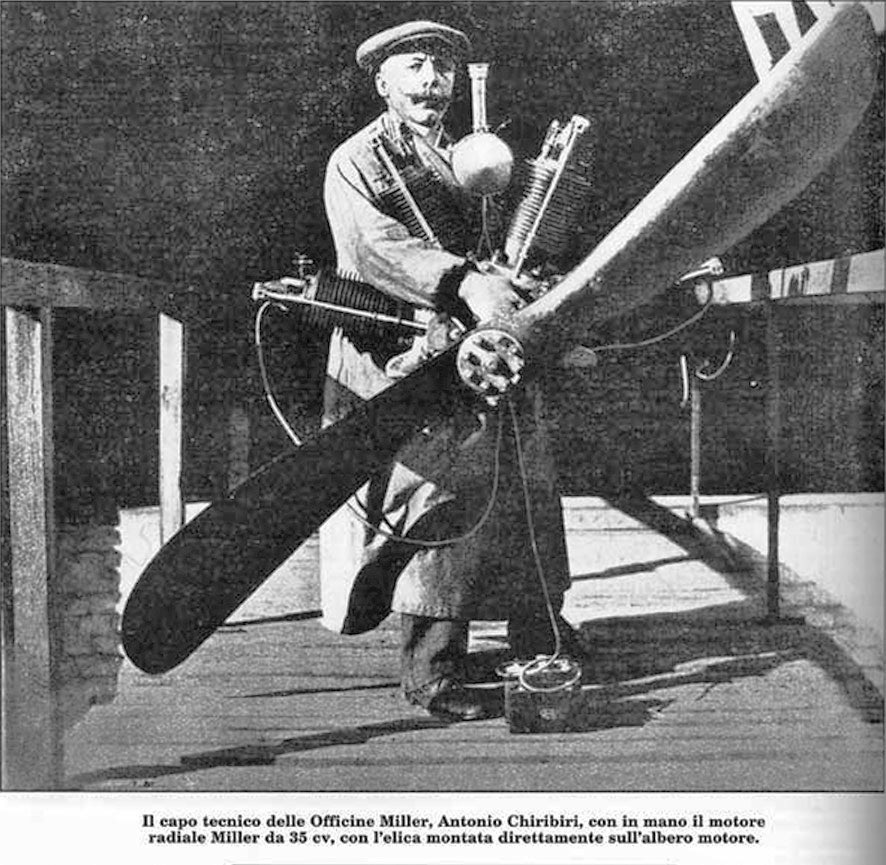 In 1910 he set up his own business, opening a workshop at 68 Via Don Bosco to oversee the production of a 40 hp engine of his own design, derived from a similar automobile type. This was definitively bench tested in February of 1911, running for over 11 hours without any malfunction. During this same period he produced a monoplane known as “Chiribiri 1”, derived from the French “Blériot”, into which he installed the new engine. 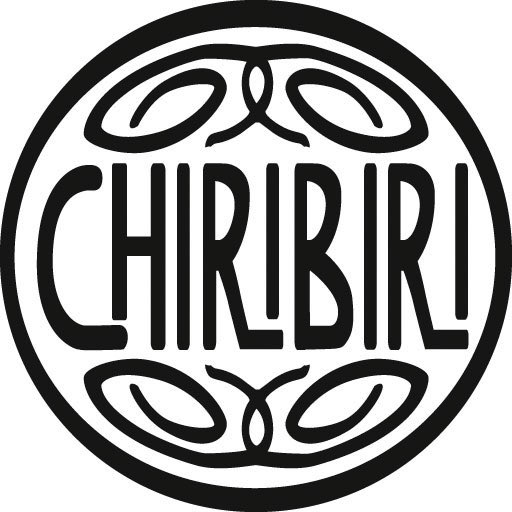 Chiribiri himself attempted to take it aloft for its maiden flight, but lacking he even the most rudimentary knowledge of piloting, the flight ended with a disastrous crash from which he miraculously emerged unscathed. Having learned his lesson, he sought and found in the person of Maurizio Ramassotto a collaborator to whom he entrusted the flight testing. In July 1911 came the “Chiribiri 2” piloted by Ramassotto, which flew without any problems over the city. It is curious to note that on October 14, 1911, Ramassotto, in the “Chiribiri 2”, received the first pilot’s license issued at Mirafiori airfield. 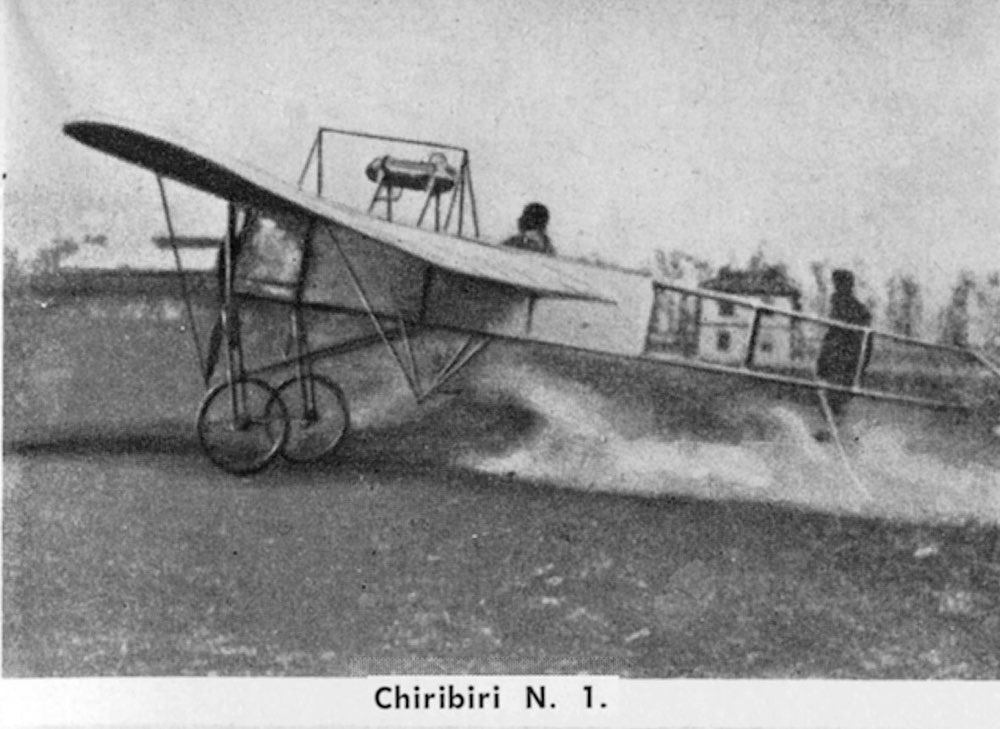 A few months later he opened a flying school with Ramassotto himself as the instructor and whose first students were Count Muzio Gallo and De Croce.

At the end of 1911 the “Chiribiri 3” with an 80 hp engine, and designed for military use, began flight tests, but its development was soon abandoned due to difficulties with the engine. In May of 1912, for promotional and propaganda purposes, two Chiribiri piloted by Ramassotto and Paolucci gave performances first in Cagliari, then in Genoa, where they used the Lido di Albaro as an airfield. 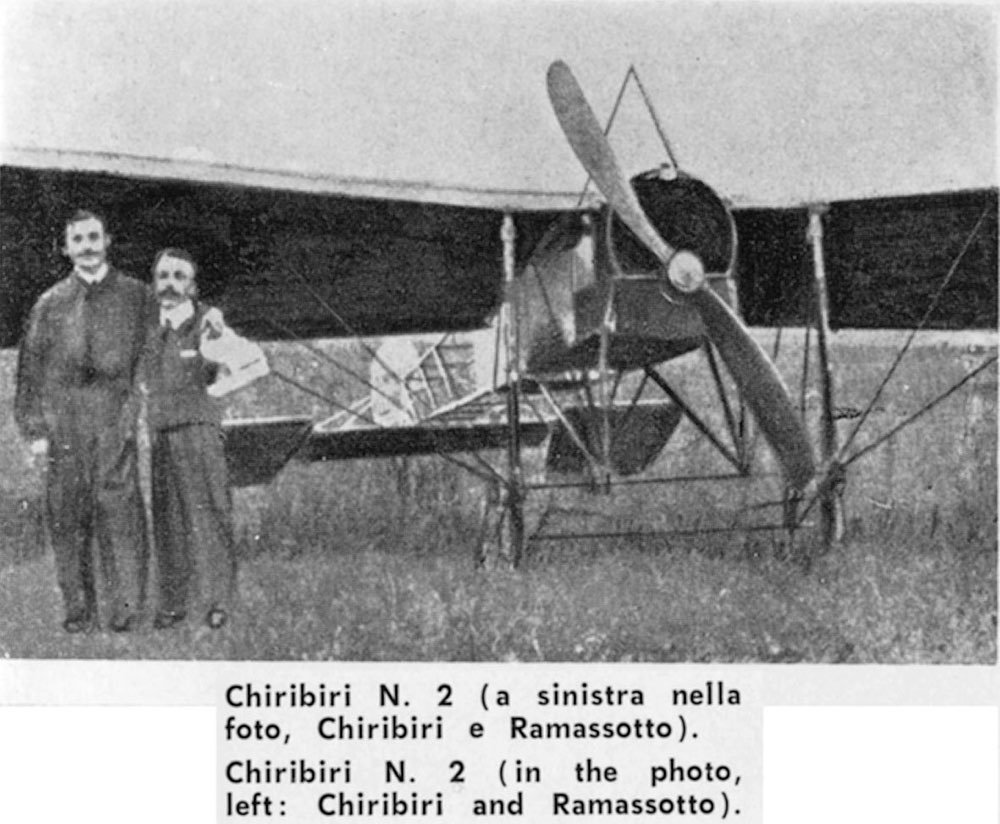 In July, the “Chiribiri 5” was tested. This was also designed for military use and was submitted for the Military Competition of 1913, but without success. After this failure, the Chiribiri aeronautics activities continued until the end of the Great War. This, however, was limited only to the series production of “Le Rhône” engines.

After the war, the Chiribiri factory was converted for the production of cars, becoming a commercial success, but that’s another story.

Francesco Darbesio, born in 1879 in Rome of Piedmont parents, while still very young returned to Turin where he completed his studies, gaining a degree in engineering. At the beginning of the century he was very interested in cars, founding the “Taurinia” company and then after studying in France in Mourmelon, he began designing aircraft, and together with Engineer Origoni founded the “Asteria” company in Via Salbertrand for their construction.

At the end of 1909, stimulated by Faccioli’s exploits, he began building the prototype of “Asteria 1”, a design inspired by the French Farman, improved by some of his own innovations.

In 1910, at the request of the Ministry of War, the “Asteria 1” was sent to the Roman aerodrome of Centocelle, where in the early days of October it underwent test flights piloted alternately by the company’s mechanic, Emilio Pensuti and Lt. Gavotti. 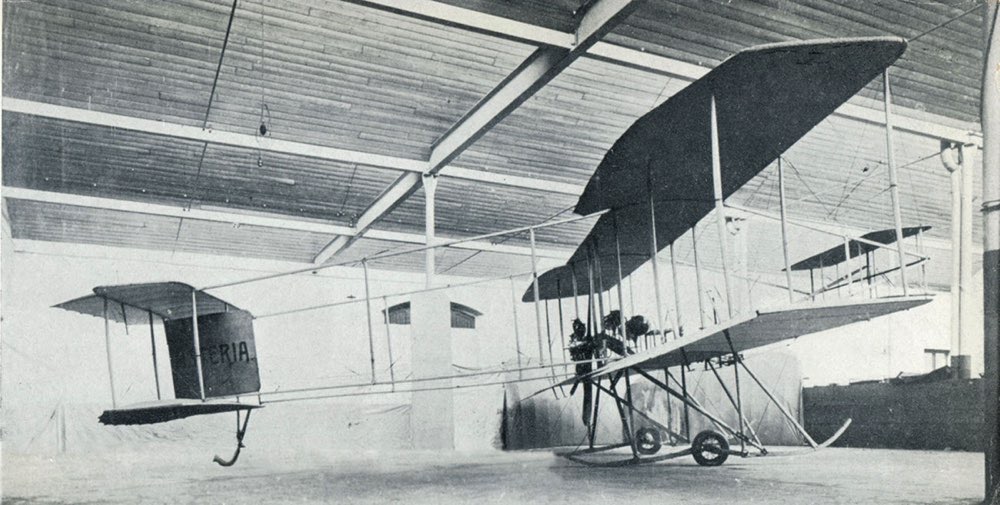 On March 6, 1911 the pusher biplane “Asteria No. 2” was rolled out and tested on the new aerodrome of Salussola (Biella), piloted first by Pietro Cavaglià and then by Raimondo Marra. Among the changes made as a result of the Centocelle testing were an increased wing area and greater fuel capacity while the tailplane was changed from single to twin.

But the most significant achievement for Asteria was the sale to the Italian Government of the “Asteria 2” which was sent to Benghazi, one of the Italian air bases during the Italo-Turkish conflict.

This was the first nationally-designed aircraft to be purchased by the Italian Army.

Meanwhile, Engineer Darbesio also produced an experimental 7-cylinder, 70 hp rotary engine which was presented at the International Exhibition of Turin. 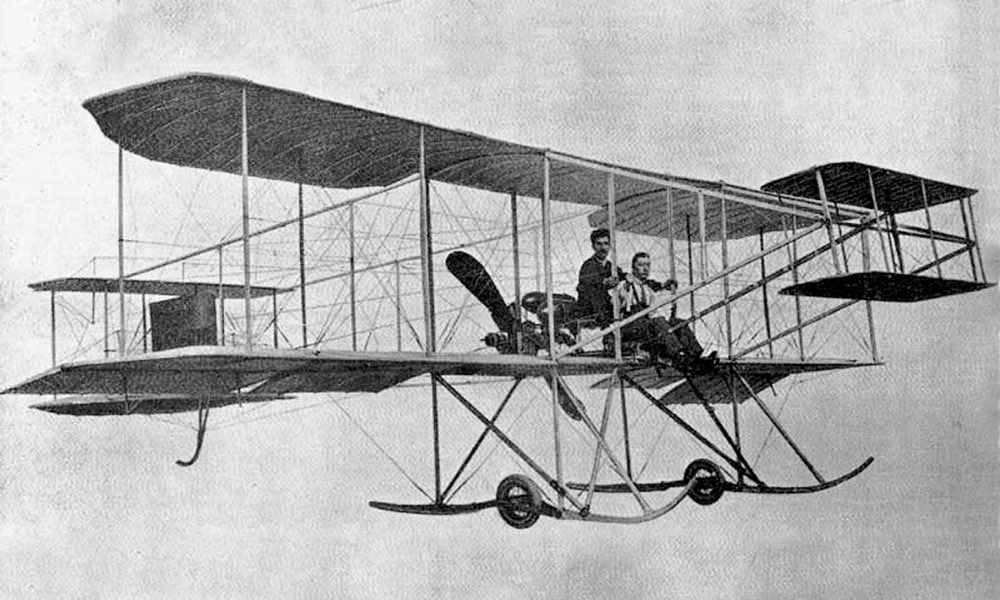 On September 8, 2011, at the new Mirafiori aerodrome, the “Asteria Aviation School” was inaugurated. The instructor was Giuseppe Rossi and among the first students was the well-known journalist and successful writer Adone Nosari.
The “Asteria 3”, equipped with the now customary “Gnôme 50 hp” engine designed to satisfy even the needs of military use, was tested at Mirafiori in September 1911. The main variation concerned the construction of a nacelle to shelter the pilot and passenger.
On the afternoon of September 20 the pilot Rossi, with a passenger on board, established a significant Italian record, remaining aloft for 2h 2’29”.
The new biplane “Asteria 4”, which retained some of the architecture of the No. 2, saw the abolition of the forward control plane. The tailplane was also modified from biplane to monoplane and a new 70 hp engine made by the luct company of Turin was fitted. 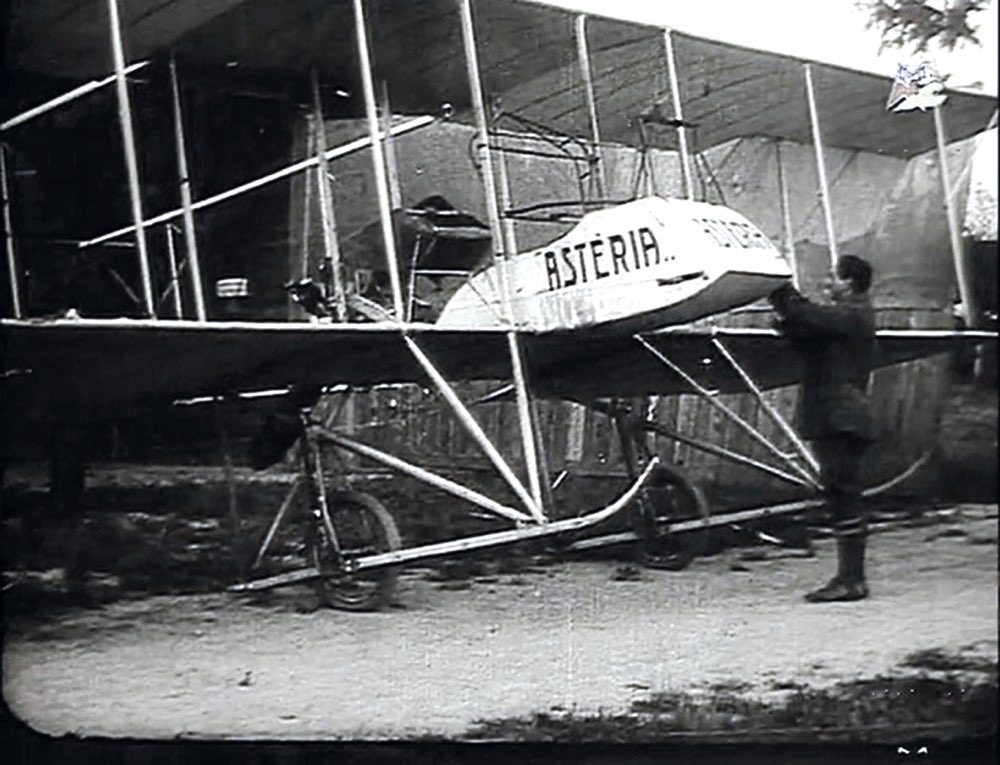 Piloted by Giuseppe Rossi, testing took place in the spring of 1912 at Mirafiori.
In autumn, the “type mb” was rolled out. This was a monoplane with a 50 hp Gnôme engine which was later replaced by one of 80 hp, making the aircraft more suitable for military use. At the beginning of 1913, Darbesio had decided to enter the Military Competition to select the aircraft which would be supplied to the army.
Asteria’s new chief pilot was Giuseppe Nosari, who had left the Air Force and had replaced Rossi. Unfortunately, on February 3, 1913, Giuseppe Nosari crashed and lost his life at the Mirafiori aerodrome.
This tragic event caused Darbesio not only to withdraw from the Military Competition, but to completely abandon the construction of aircraft.
During the course of the 1st World War he recovered his interest in aviation and began collaboration with the aviation section of the Officine Savigliano. In 1916 he completed the development of the design for an interesting twin-engined aircraft whose construction was begun by the sit company, but was never completed.
He later took up the post of Secretary of the Torinese Section of the Italian Aerotechnical Association, a position he held until 1944, the year of his death. 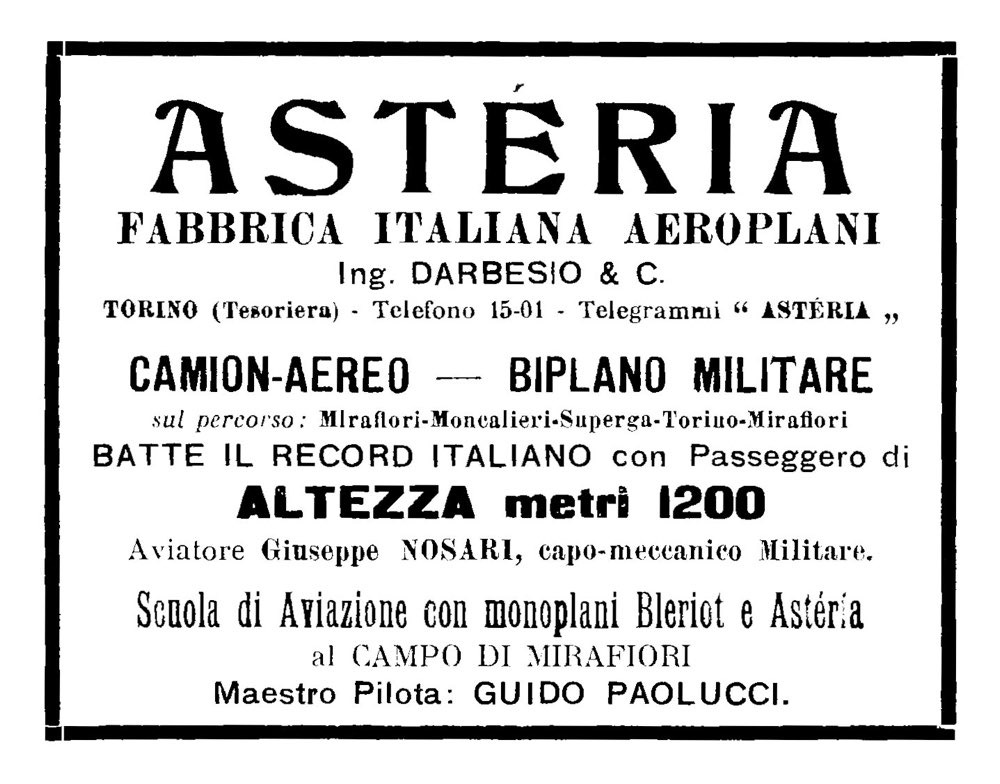 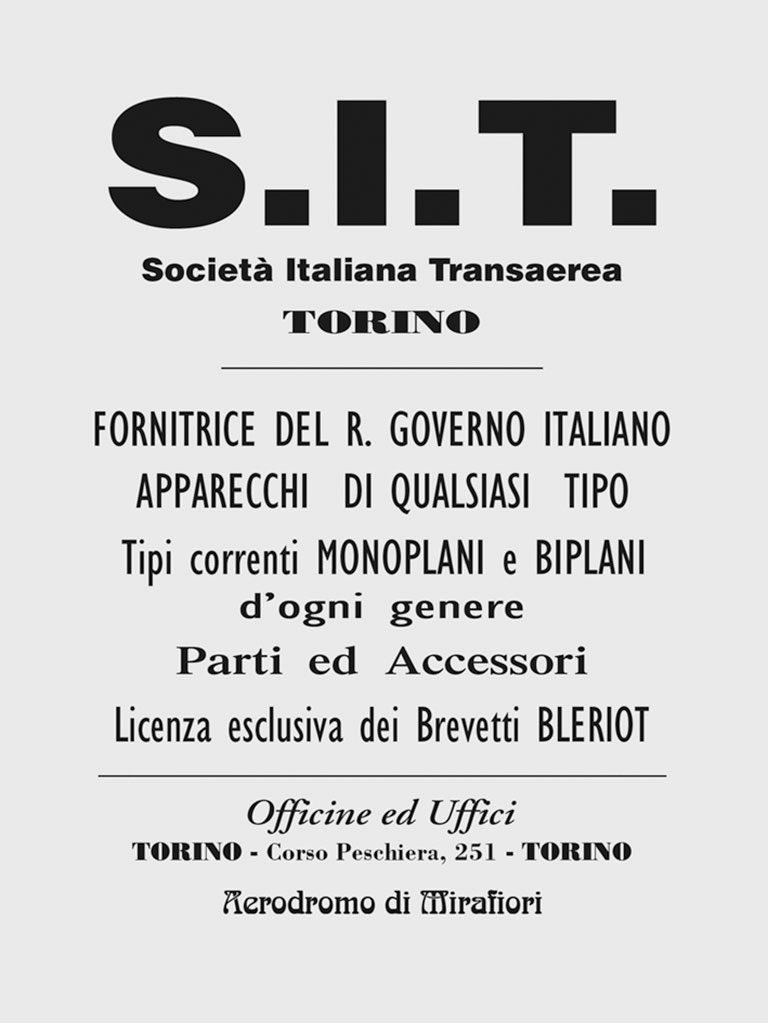 The technical director was Engineer Alberto Triaca, Romolo Manissero was the test pilot and the company employed more than 150 people.

It was with a Blériot 80 that the Frenchman Perreyon, one of the sit pilots, achieved the first Turin-Rome-Turin flight in the same day which generated a wave of enthusiasm. 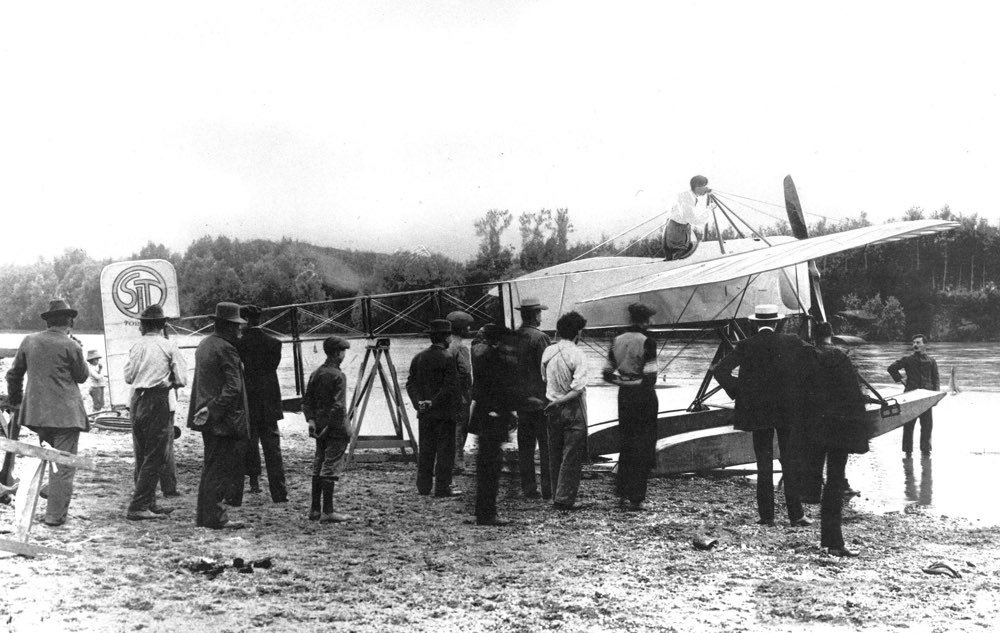 In 1912 the Ministry of War launched a program for the acquisition of 150 aircraft to be delivered by 1913.
Sit was awarded the contract for the construction of 80 aircraft, mostly Blériots and Farmans, and was the first company to develop the series production of aircraft.
In 1914 in a sit-Blériot with a 50 hp Gnôme engine, Romolo Manissero gave the first performance in Italy, over the Mirafiori aerodrome, of a series of loops and other aerobatic maneuvers. In the same year, on the Po, Manissero tested a Blériot seaplane with a 90 hp Le Rhône engine with full satisfaction, but this did not generate much commercial interest.
In the summer of 1917, sit was acquired by Ansaldo and was renamed as “s.a.i. Gio. Ansaldo C. – Aeronautical Factory No. 3”. 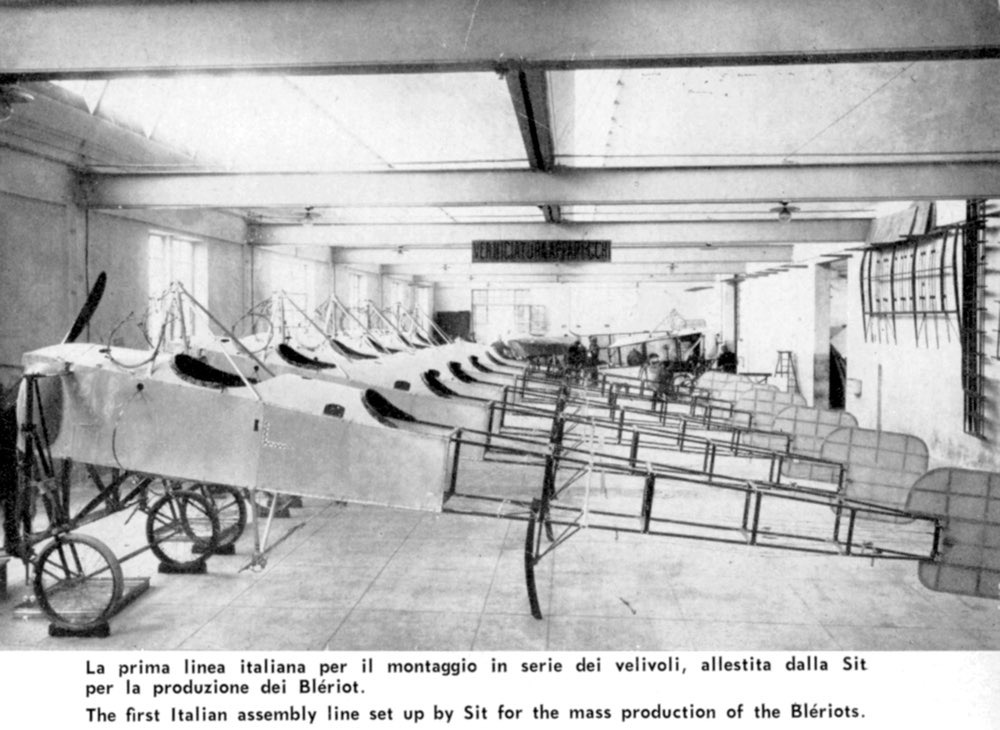 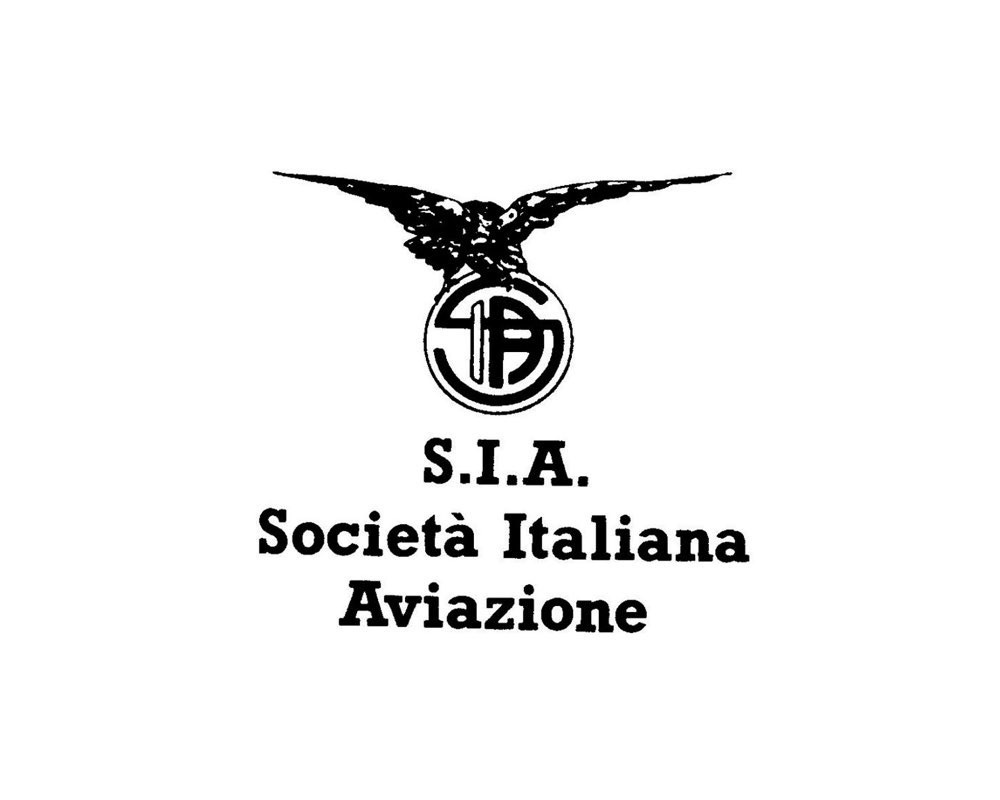 In the summer of 1915, Engineer Torretta, the sia-fiat head of the design office, in collaboration with the d.t.a.m. (Military Aviation Technical Directorate), began producing sp.2 models (designed by Savoia-Pomilio) equipped with fiat a.12 engines of 250 hp (much faster than the Farmans) that were tested and developed by Lt. Brach Papa at Mirafiori, produced in about 100 examples. The sp.2’s were equipped with a machine gun in a specially-designed turret.

Meanwhile, production was moved to the sheds built on the Mirafiori aerodrome from which came the sp.3 and then, from 1916, the sia “7b1”, famous for having been used for both D’Annunzio’s “Bakar mockery” (see p. 90) and for Giulio Laureati’s historic feat (see p. 80), followed in 1917 by the “7b2” with the 300 hp fiat a12 bis engine.
The evolution of the models continued unabated and even led to the production of a bomber (the 9 b) and a twin-engined version (the 14 b).
As of 1918, sia adopted the name of Fiat Aviation. Later, following the acquisition by fiat in 1926 of Ansaldo’s aeronautical facilities at Corso Francia 266, all aeronautical activities were channeled into the company renamed as “Aeronautica d’Italia”. 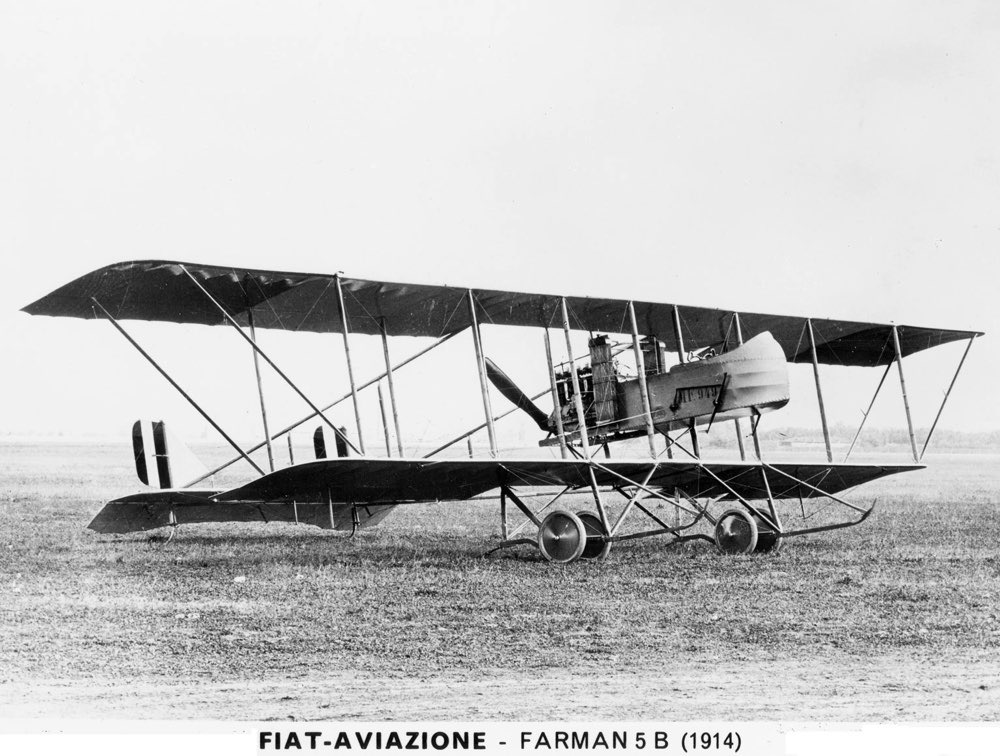 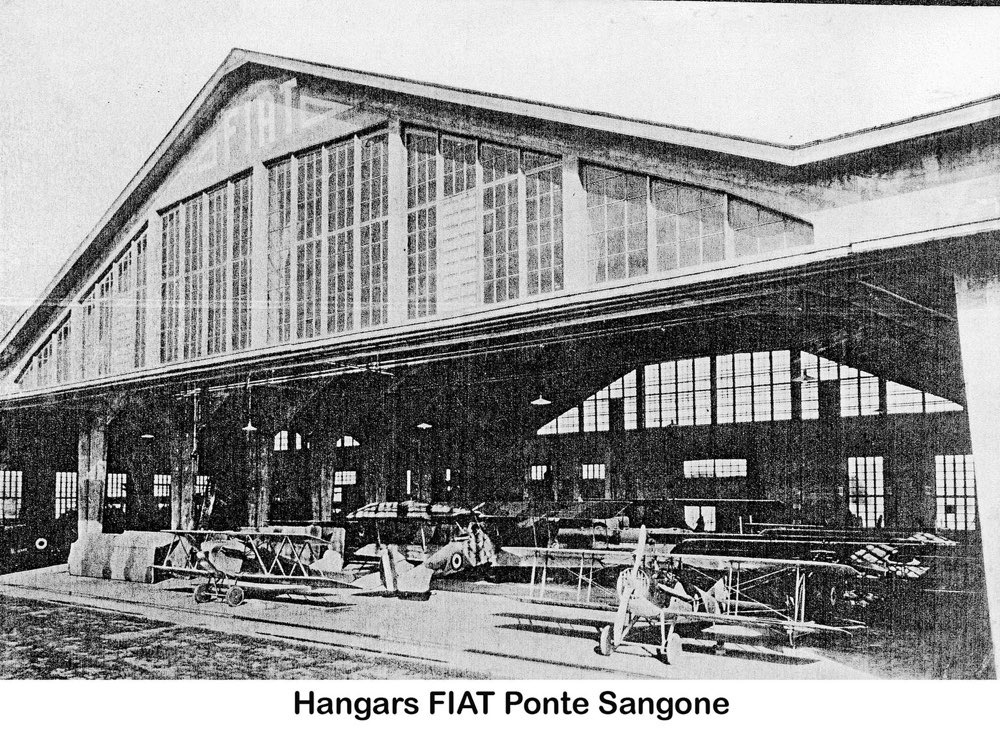 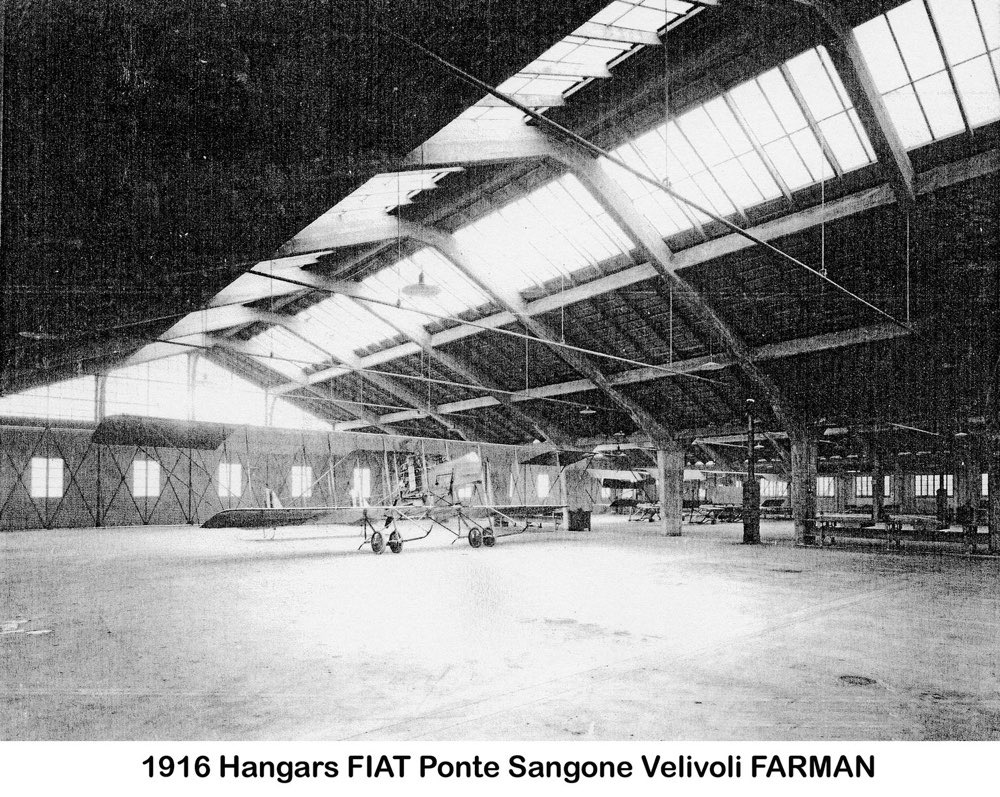 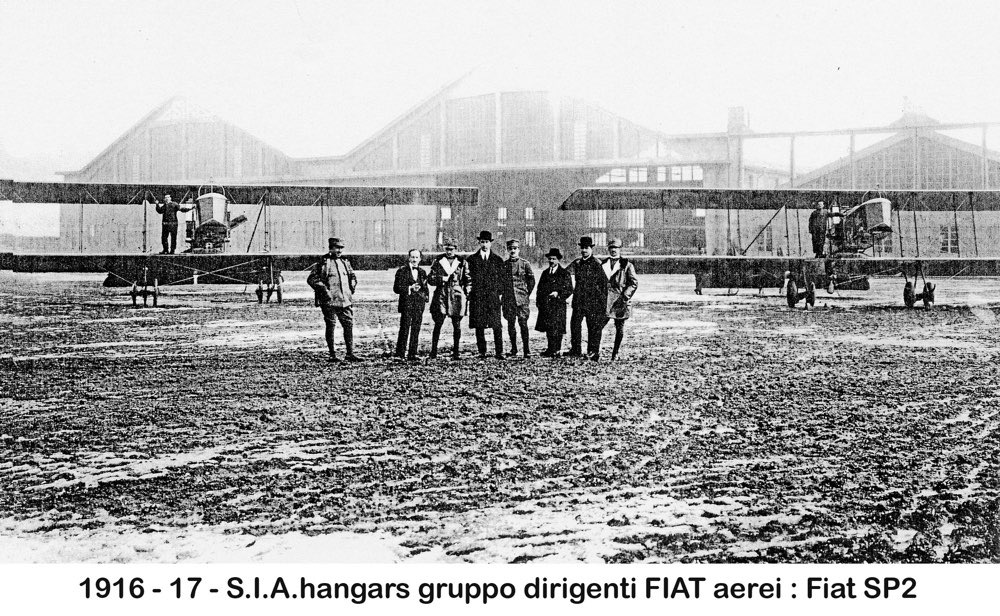