The Sicilian-born engineer Franz Miller is credited with the distinction of heavier-than-air Flying Machines. The enterprise was set up in the early months of 1909, and had its premises at Number 9, Via Legnano, Turin.
The factory consisted of two large workshops used for mechanical operations, while assembly took place in the courtyard. Some 30 staff, both clerical and manual, were employed.
Miller’s experience in the aeronautical field went back to 1906, a period in which he constructed scale flying models of an aircraft with a curved dihedral wing.
In March-April of 1908 he built a 4 cylinder 40/50 hp engine which was soon followed by another of 100 hp. 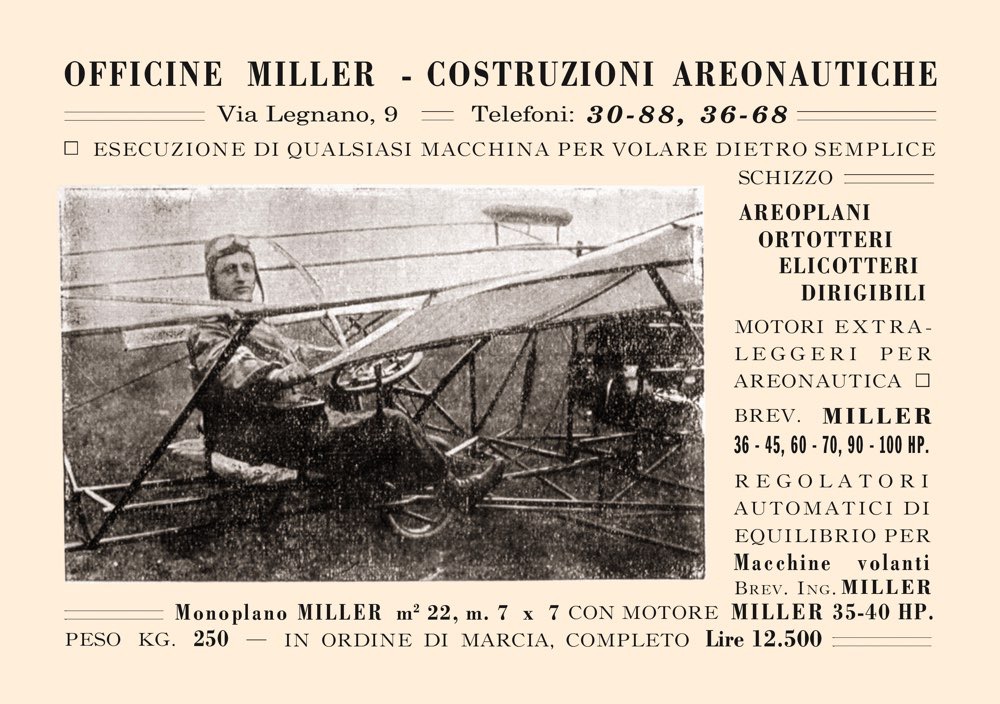 The publicity for his newly-created factory read: “We will build any kind of flying machine, even from a simple sketch”. This affirmation incited the curiosity of a chemist from Fossano, initiating a most interesting story.

To quote from the book “Come nacque l’aviazione in Italia” by Pietro Gasco: “Dr Fuseri, a chemist from Fossano, near Cuneo, designed and supervised the building of a type of ornithopter which was subsequently test-flown in the Parade Square. On its first attempt, it rose almost one metre”. but was unable to repeat the performance in later attempts. 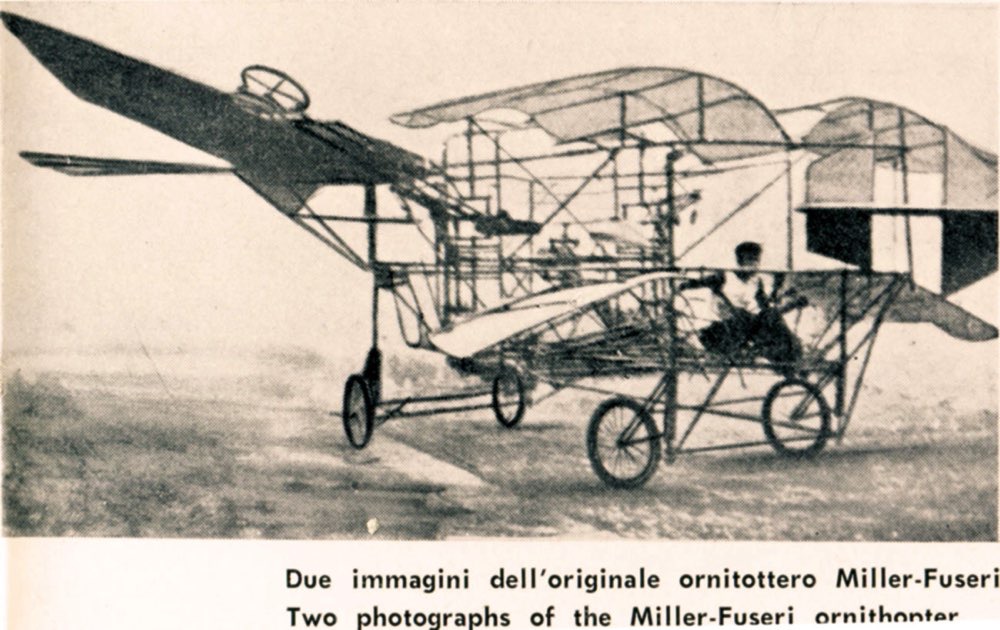 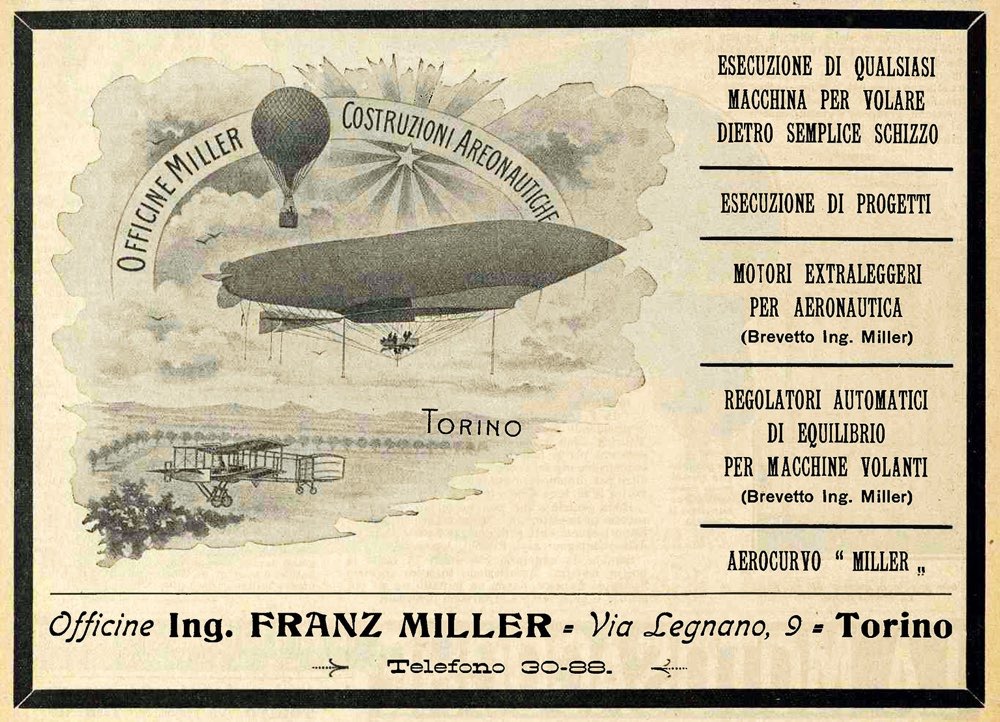 “Fuseri had heard that Miller intended to open a ’Flying Machine Factory’ in Turin, so set off for Turin with his drawings and enthusiastically outlined his project to Miller, who agreed to become one of four partners in the venture to build the aircraft and its engine. I myself also participated, buying four of the Company’s shares at 100 lire each.” 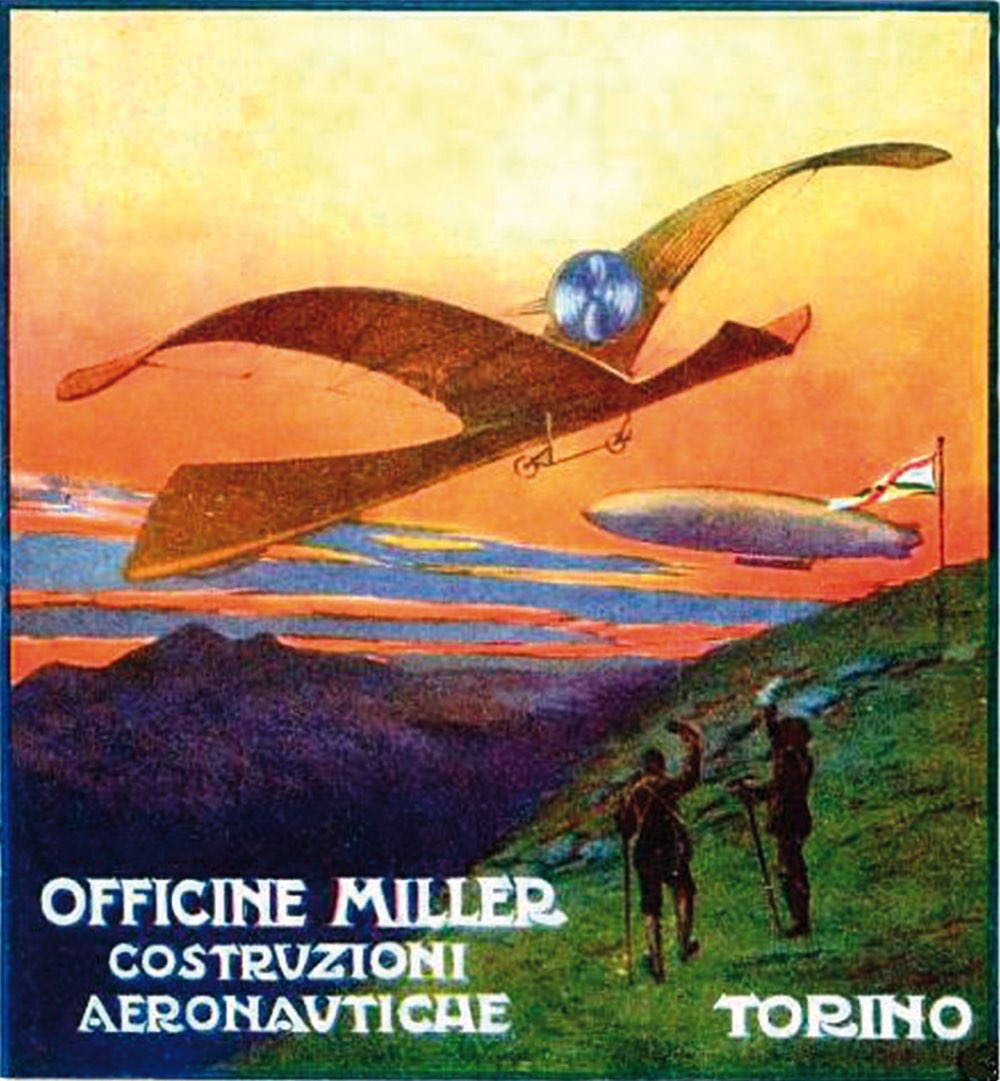 The first aircraft to be constructed was Fuseri’s ornithopter. This flapping, multi-wing machine was powered by Miller’s 100 hp engine driving a propeller through a vertical shaft. However, the aircraft never managed to fly.

Despite the apparent insignificance of this event, it is none-the-less the earliest known instance of anyone actually commissioning the building of an aircraft in Italy. In other words, it embrionically represents the beginning of the Italian aircraft industry for the construction of heavier than air flying machines.

Putting Fuseri’s curious aircraft behind him, Miller successfully constructed another aeroplane (called a helicoplano) and its engine on behalf of the Bolognese designer and draftsman Mario Cobianchi.

In September, the “Cobianchi-Miller” took part in the Brescia Air Race Circuit, but only managed to taxi, without being able to take off. In October it was thus sent to Bologna for modifications which Cobianchi himself undertook.

Also in 1909 he went on to build the “Aerocurvo” designed by Engineer Ponzelli. This aircraft, the first Italian monoplane to fly, was entered in the air race in Brescia in 1909, piloted by that pioneer and benefactor of aviation, Baron Leonino Da Zara at Bovolenta but due to an accident during the preparations, he could not participate in the race. 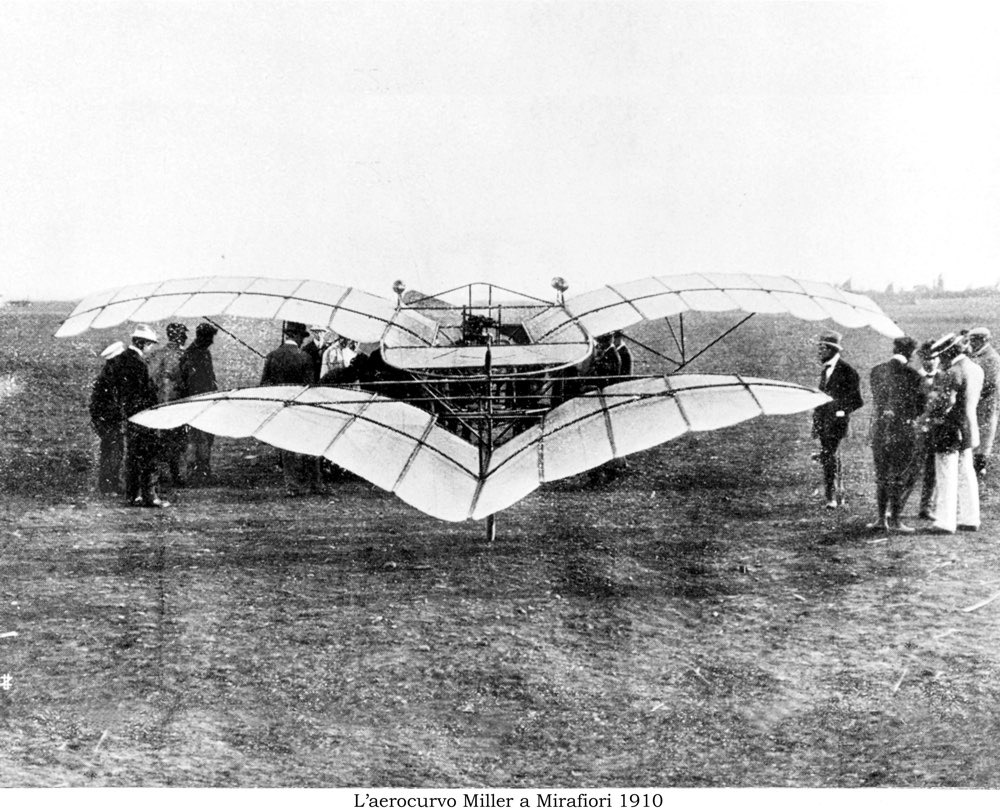 In 1910, Miller built a monoplane designed by Engineer Lucchesi, powered by a Miller 35 hp engine. This flew for the first time from the Parade Square of Turin.

His advertising also asserted that he was building dirigibles, the first of which was to a design by Engineers Celestino Usuelli and Mario Borsalino. 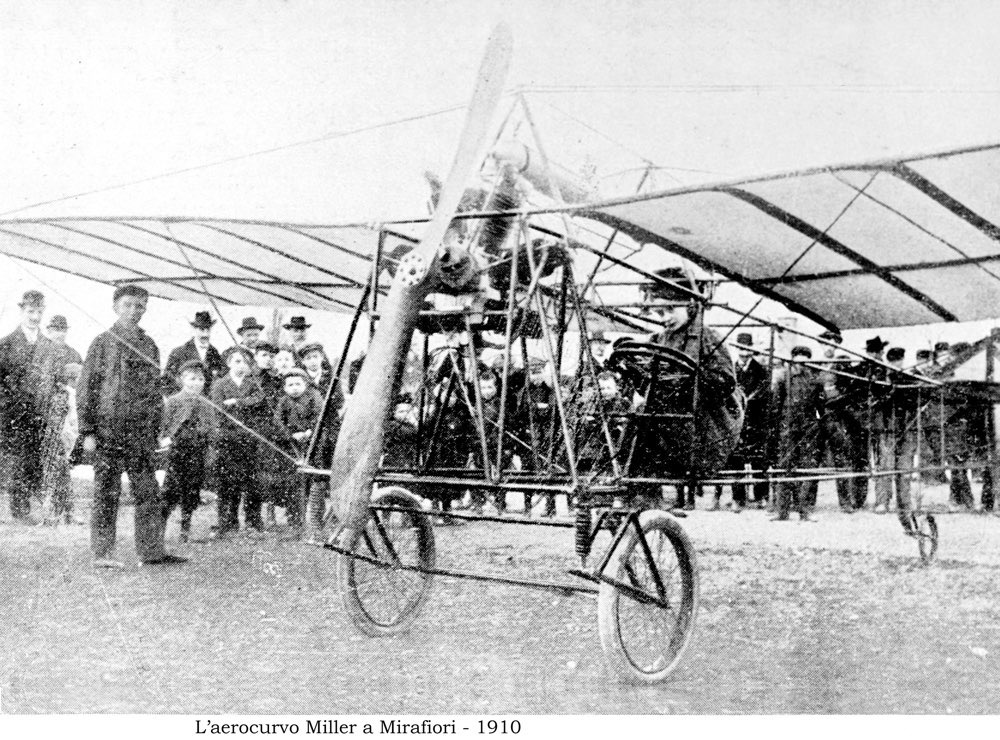 Some 51 metres long and 9,5 metres in diameter, the prototype of the Usuelli dirigible (built in a large shed at Lombardore) saw its maiden flight on the 16th of August 1910. Usuelli later moved to Milan where he continued to design dirigibles.

Miller’s activities as an aircraft constructor slowly decreased due to the economic difficulties induced by his lack of commercial success. 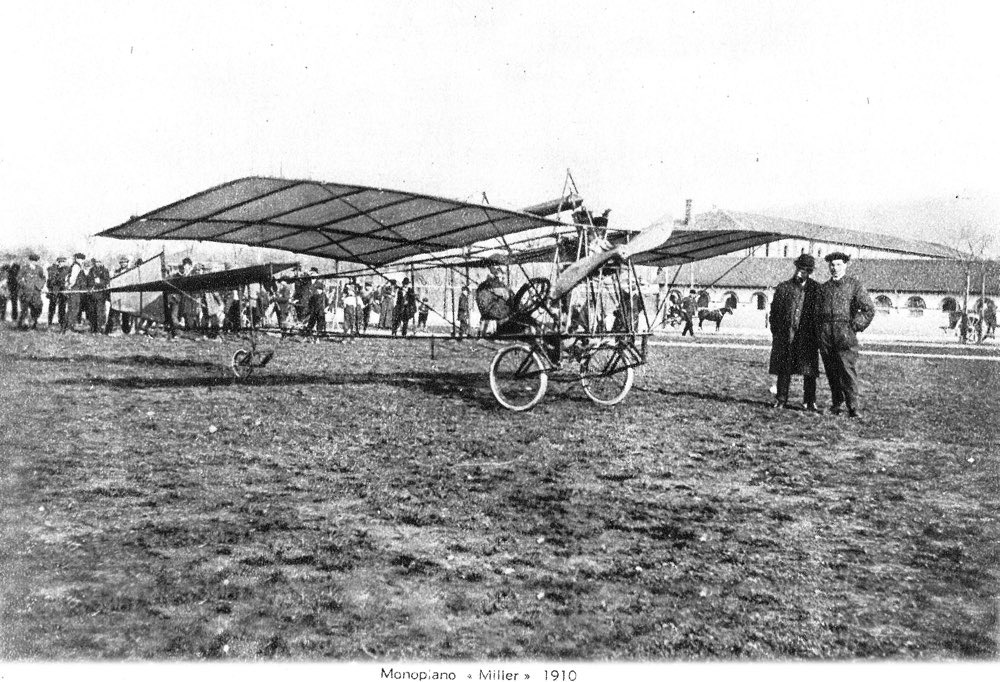