The birth of the torinese aircraft industry 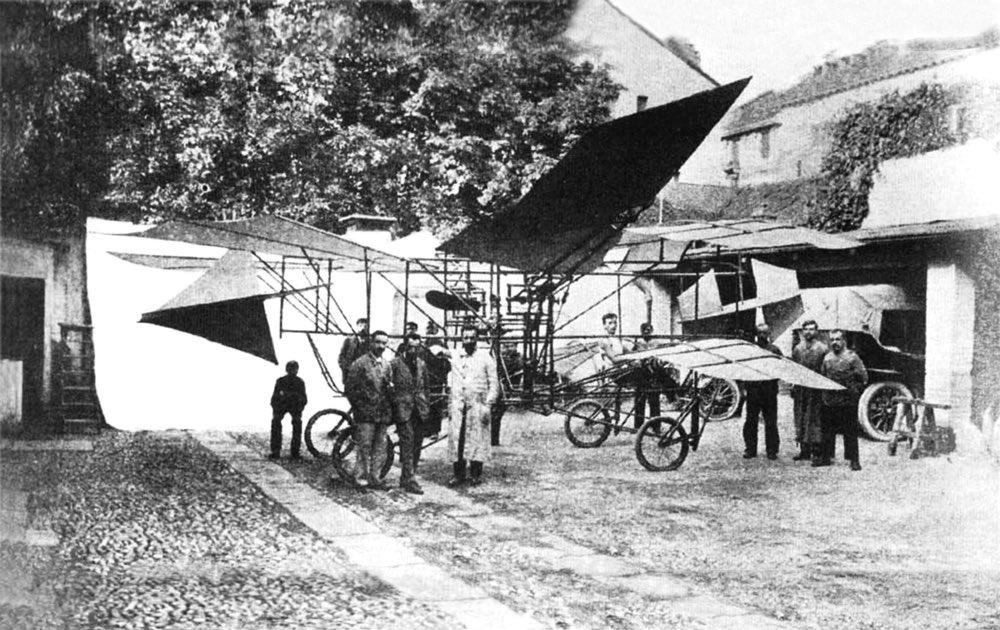 The early years of the 20th Century were characterised by the enormous zest for “modernity”, for scientific discoveries and for technological innovations, and these were the years in which Turin became the centre of industrial revolution where a new enthusiastic desire for novelty was perceptible in the air.

Turin’s traditional industries - cloth and confectionery - were gradually giving way to the new mechanical opportunities, in particular the automobile industry, and this new direction provided fertility and cultural preparation for aviation-linked initiatives. Thuse, in those earliest years of Italian aviation, Turin already possessed the skill to strike the spark which initiated the “heavier than air” aircraft industry, destined to spread rapidly to other parts of Italy.

In the wake of Faccioli’s experiments in Venaria, a number of small workshops were opened, and between 1909 and 1910, on the initiative of young, enthusisatic but mostly inexperienced designers, adventured into the world of aeronautics with mixed success.

Bruno Foco from Turin, the son of a postman, and without having attended an adequate course of studies, at the age of 18 years became interested in the problems of aeronautics, and intrigued by Faccioli’s experiments at Venaria, between 1908 and 1909 built an experimental biplane.

This aircraft had a wingspan of 10 meters and a wing area of 60 m2; its canard type control surfaces had a total area of 20 m2.

Given the materials used for the construction, the aircraft turned out to be heavier than expected, which kept him from having success.

Foco began the construction of a second biplane very similar to the first, for which he employed much lighter materials. There is no record that this was completed. 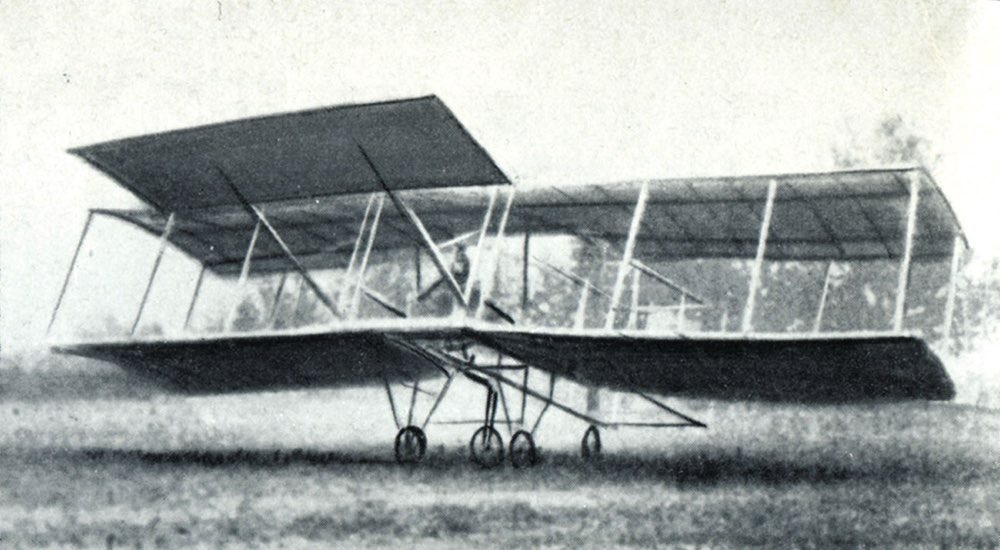 Giving it the designation of “quadricell biplane”, Luigi Martino (a mechanic in the state railways) designed an aircraft made up of two biplane cells in tandem. The wing area was 62 m2 with a total weight of 460 kg. The project included two rear vertical rudders having symmetrical and parallel action, actuated by means of a steering wheel, which was also used to steer the wheels of the undercarriage. The design and then the construction began in 1905 in Scalenghe, in the Azzario workshop with the collaboration of three willing friends, Roncuzzi, Negro and Varalle. The engine used for the first ground tests was a 45/50 hp Anzani, later replaced by an engine designed and built by Martino himself in Turin, in the workshop of the night school in Via Ormea.

After four years of study and modifications, the flight tests of the “quadricellular” took place at Venaria towards the end of 1909, but with little success. 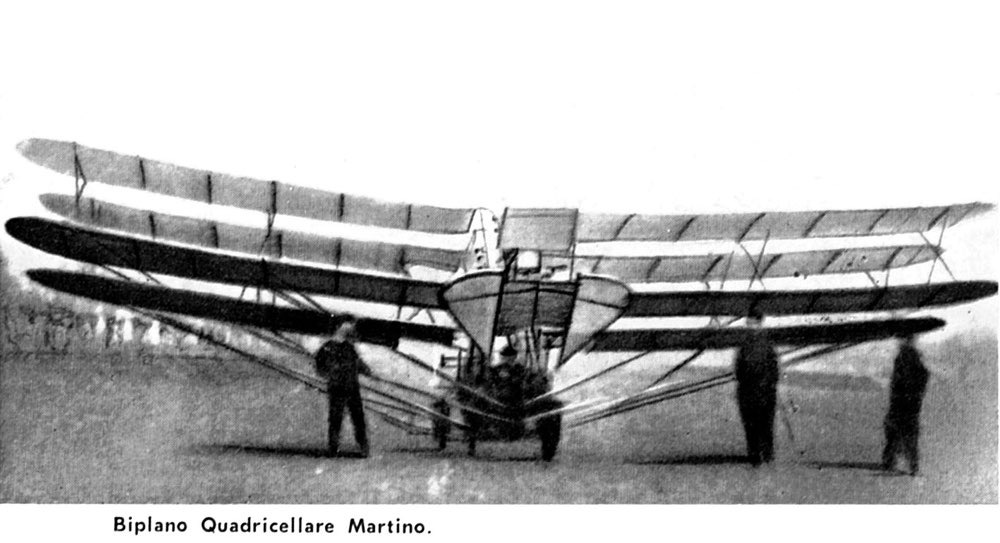 The last 4 of factories these exhibited at the Turin Aeronautical Exposition held from the 8th to the 24th of April 1910. 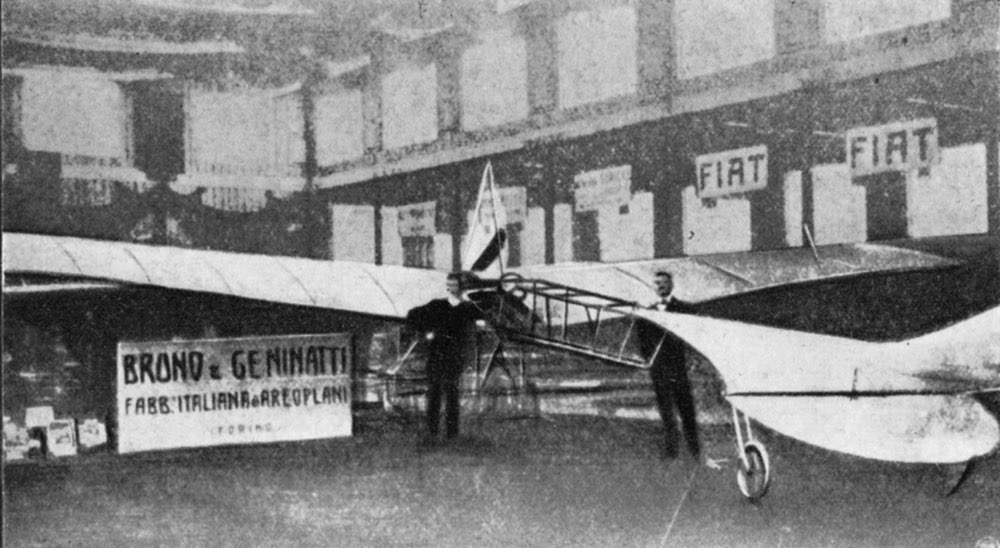 Since 1909, the Turin physician Dr Attilio Robiola had begun to study and to design means of aerial locomotion based on the observation of the flight of birds at the end of which he devised “an airplane that cannot overturn”, that is, an “autostable aircraft”.

As a practical application of his studies, between 1912 and 1913 he built an interesting aircraft, which he called a "Hydromultiplane", which was so described by the British newspaper Independent in 1914: “A new kind of flying machine, the Robiola multiplane, is built on this principle (auto-stability) and is entirely of metal, with six wing planes, one above the other”. 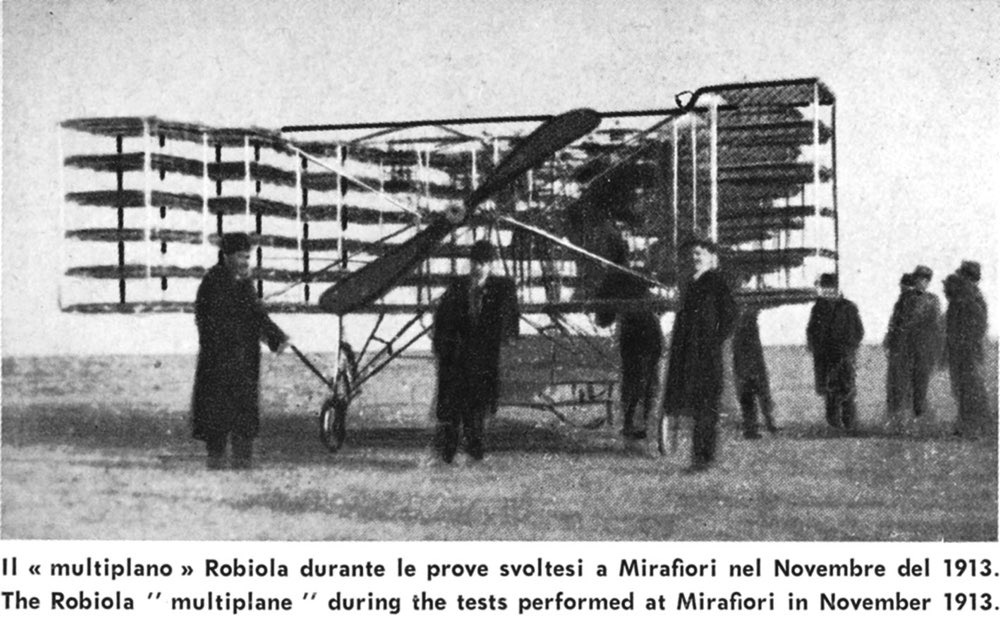 He was able to obtain the cooperation of the Aviators Battalion, which gave him two 80 hp Gnôme engines, and attempted test flights at Mirafiori in November 1913, but without success because of its excessive weight (about 1 ton) due to which his project foundered without appeal.

After the attempt with this aircraft, Robiola gave up aeronautics, although during the 1920’s he obtained patents for several engine designs.

Robiola described his theories in a 30 page booklet entitled “The Robiola hydroaeroplane – Edison’s Theory in harmony with the principles devised and applied by Dr Robiola” published in Pavia by the Tipografia Succ. Bizzoni in 1912.
Amongst the constructors of aviation accessories, could be found the following:

However, alongside these basic and experimental activities, a number of industrial concerns were also emerging. 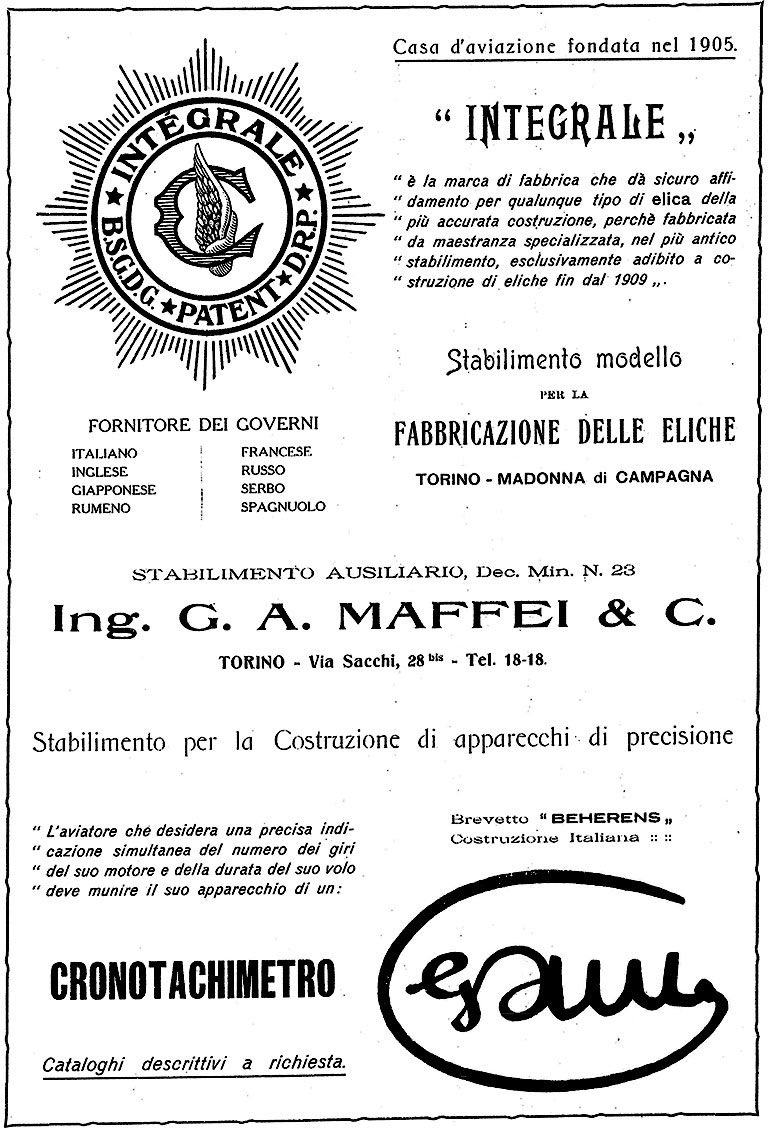 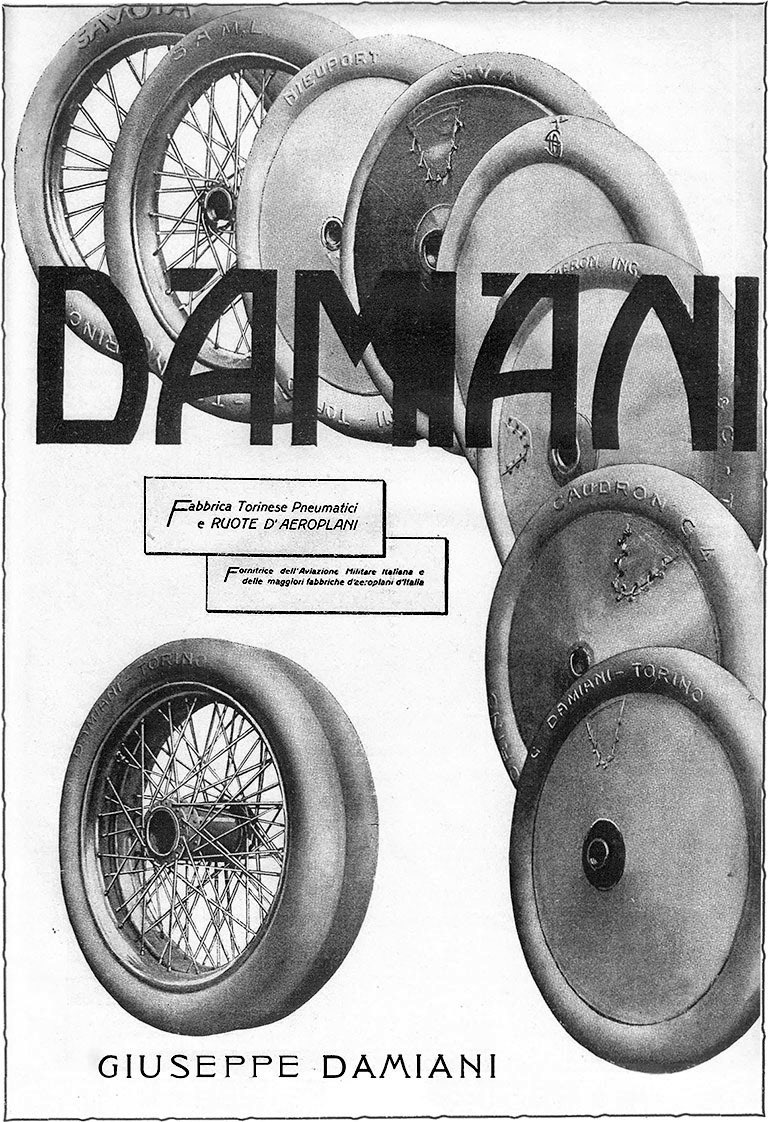 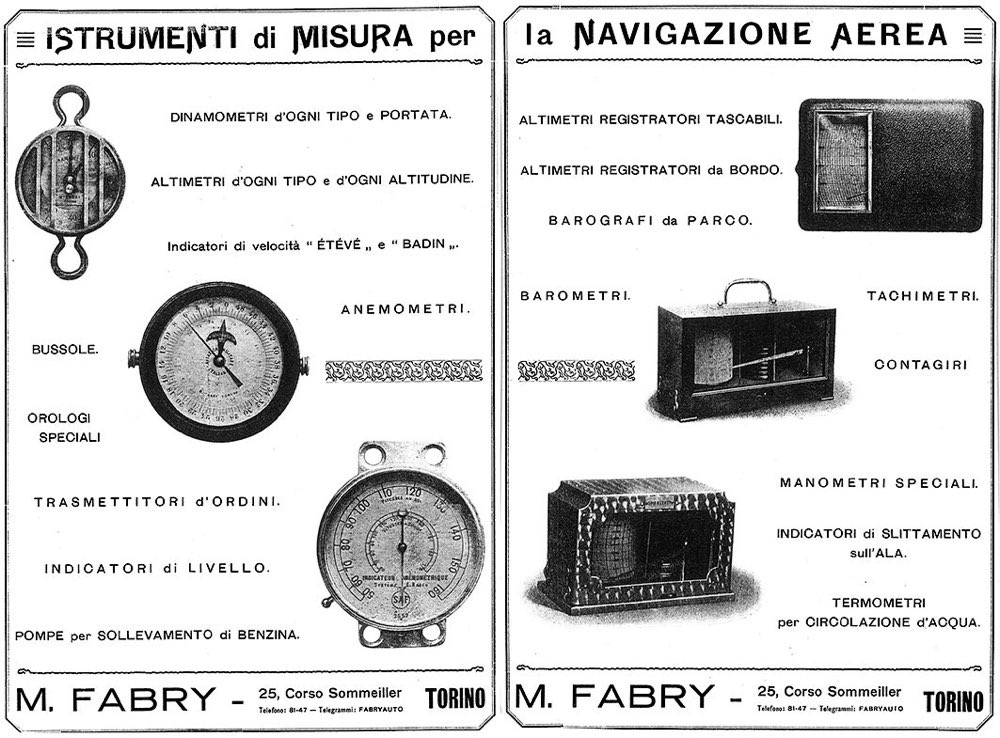 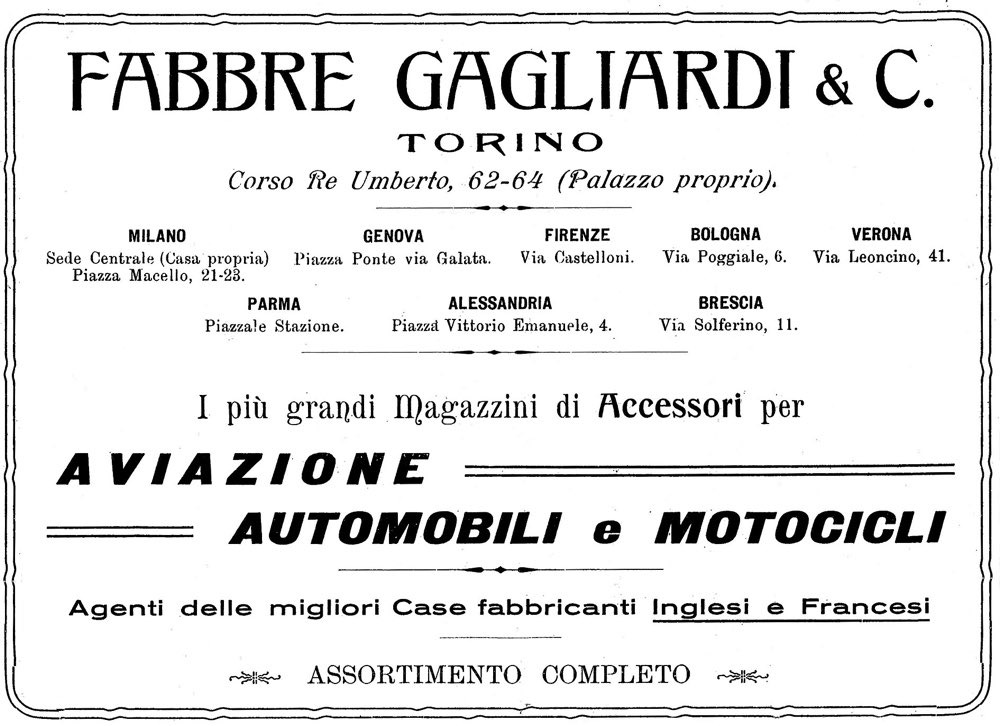 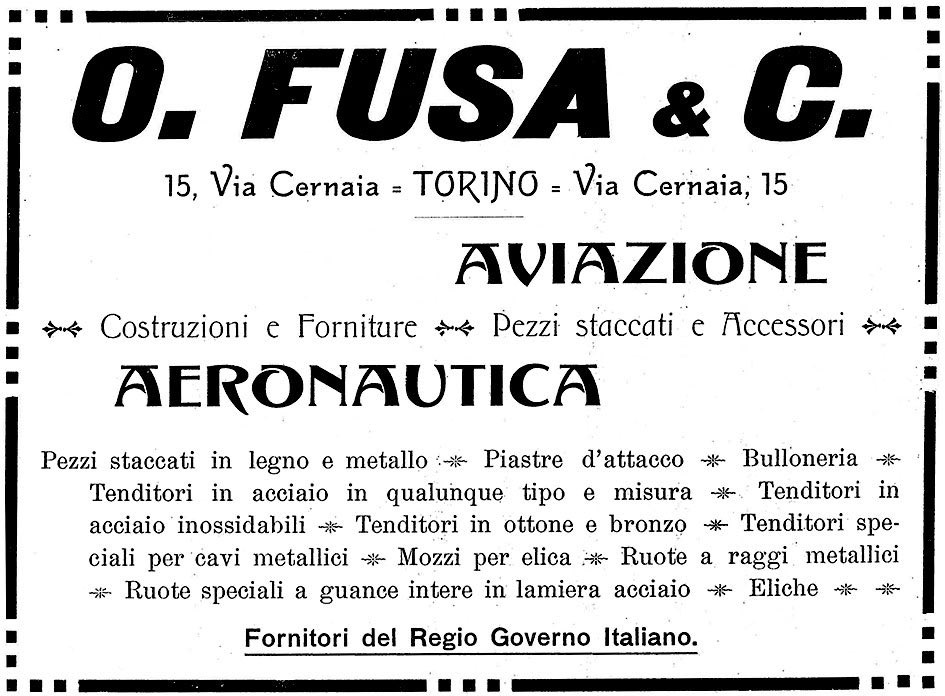