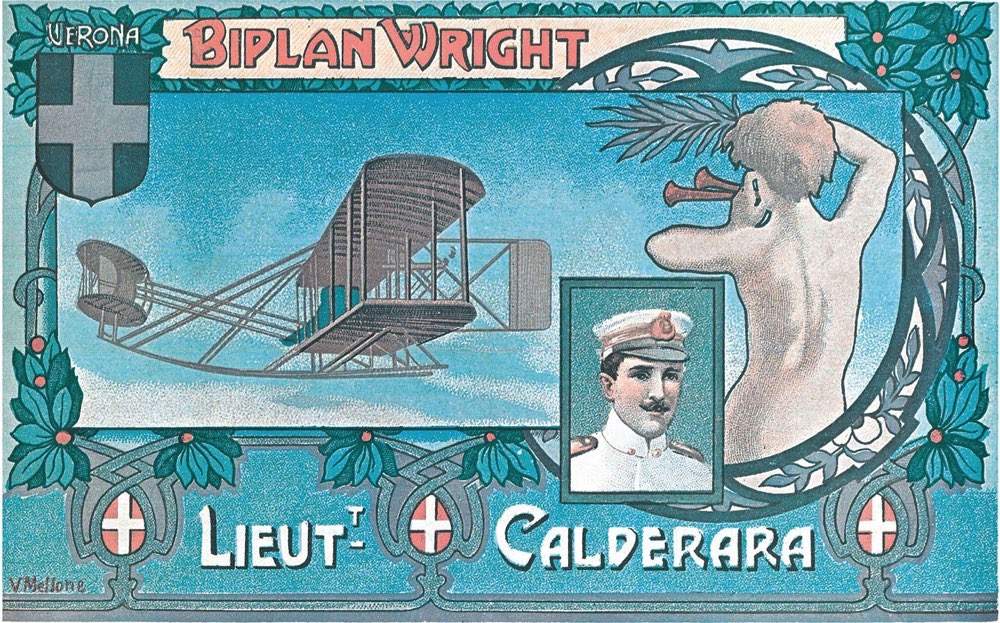 In the years immediately preceding the First World War, the airfields at Mirafiori, Venaria Reale and San Francesco al Campo (not far from the present-day Caselle airport) took on the role of flying schools catering for the many intrepid would-be aircraft pilots.

The very first pilot’s licences in the world were instituted by the Aero Club de France. Brevet n. 1 was awarded to Louis Blériot on the 7th of January 1909. Wilbur and Orville Wright were issued with brevets 14 and 15 only in November of that same year.

The first civil “brevet” in Italy was awarded in September 1909 to Lt. Pilot Mario Calderara from Verona. He had learned to fly in April 1909 at Centocelle (Roma) in a Wright Flyer 4. The brevet was awarded by the French Licencing Commission who had come to watch the races at the air Circuit of Montichiari (Brescia) where Calderara came first in two major races (the “Oldofredi Trophy” and the “King’s Cup”). His licence is actually dated some months later (10th May 1910). 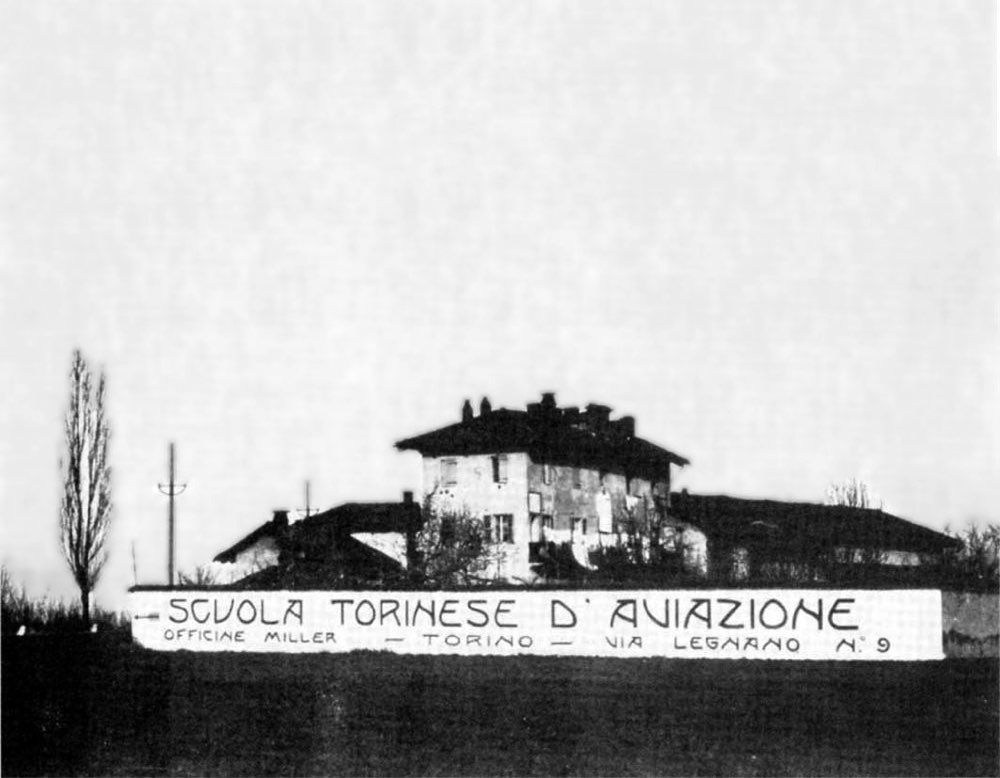 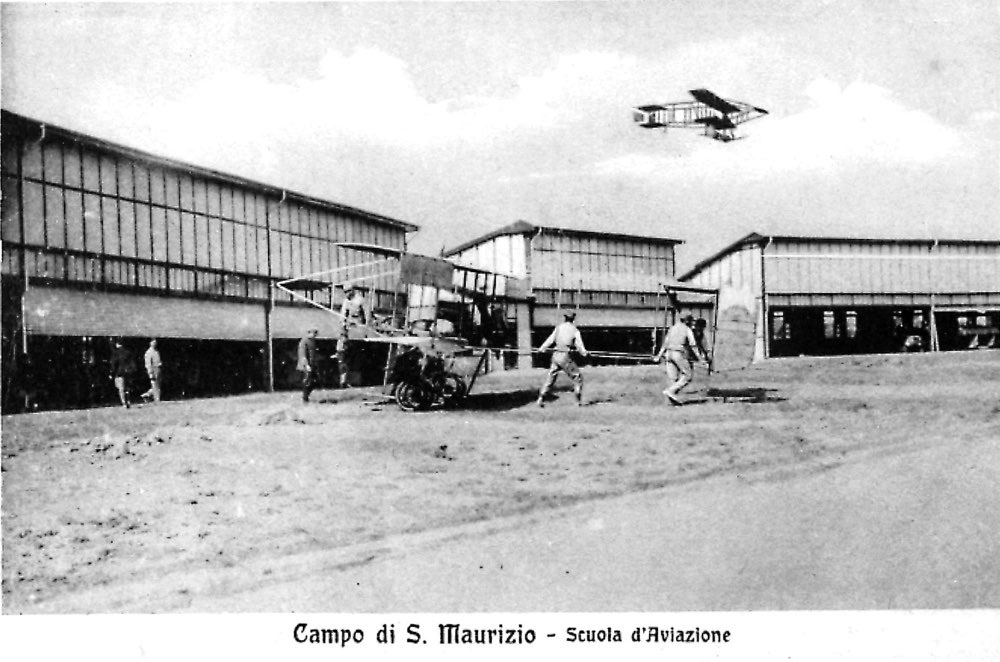 From September 1909 until the 18th of August 1910, no further brevets were awarded in Italy. There was no legal requirement to have one in order to fly and thus little interest in obtaining one. Those who really wanted one went to France, and a number of Italian pilots, among them being Francesco Baracca and Francesco Brach Papa, did exactly this.
The first theoretic courses organized by the sat began on the 14th of February 1910 at its premises at No. 1 Via Balbis. One part of the school, specially for mechanics and conductors of automobiles, was “recognized by the Government”.
“The courses (of about two months duration) were accompanied by more than 500 lantern slides”.
The Director of the school was Engineer Emilio Marenco, with the instructors being Engineering Professors Effren Magrini and Franz Miller, Chief Engineer Carlo Vita Finzi, Engineer Francesco Darbesio of the Asteria and Engineer Triaca of the sit. The school’s Honorary President was the Mayor, Senator Secondo Frola.
Engineer Miller, who in 1909 founded the first Italian aeronautical industrial company, was also seeking an area in which to experiment with his aircraft, built in Via Legnano in Turin, and identified a suitable location in the Lombardore area.
His airfield was situated on the flat ground alongside that which until recently was the military firing range of Lombardore, and it was there, in 1910, that Miller set up his school. 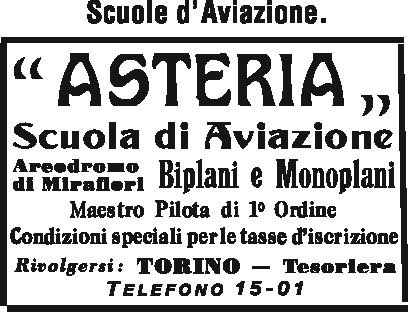 In May 1910, Montù and Gatti Goria made an attempt to open a flying school close to where Delagrange had made the first flights in Turin two years earlier. This closed after only one week of operation following an accident in which their single instructor, Pietro Gasco, was injured.
In the autumn of 1911, Antonio Chiribiri (Miller’s former designer) founded the “National School for Aviators” at Mirafiori.
Maurizio Ramassotto, in a “Chiribiri 2” aircraft, was the first student to gain a licence from the school, going on to become its instructor.
In 1911 the Asteria company also opened a Flying school at the Mirafiori airfield “with both biplanes and monoplanes” and with “instructors of the highest order” as the advertising pointed out.
The airfield at Mirafiori also became the operational base for the newly constituted “Turin Society of Aviators And Aeronauts”. In 1912, the society trained 8 pilots up to “brevet” standard – seven civilians and one military pilot.
The sit also set up a training facility at Mirafiori, and by 1915, when Italy entered the Great War, this had become one of the largest flying schools in Italy, with 45 pilots under training.
By 1911, the Army authorities had become aware of the potential of the “flying machine” for military purposes, and began to set up flying schools at the various airfields already in operation, such as Mirafiori, Cameri (which was later to become the largest flying school in Italy), Centocelle, Pordenone, Bovolenta, Taliedo and others. The very first military “brevet” was awarded to Captain Carlo Maria Piazza of Busto Arsizio. 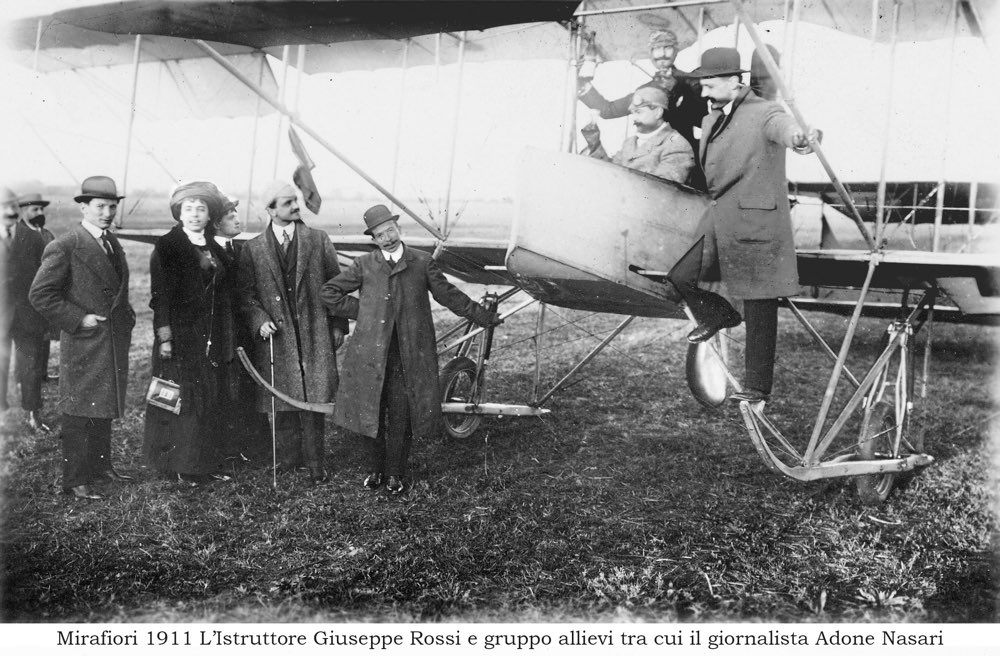