Many are the memories and the records that our aviation has consigned to History, not merely the previously-mentioned exploits of Faccioli, Brach Papa, Laureati, De Bernardi and others. 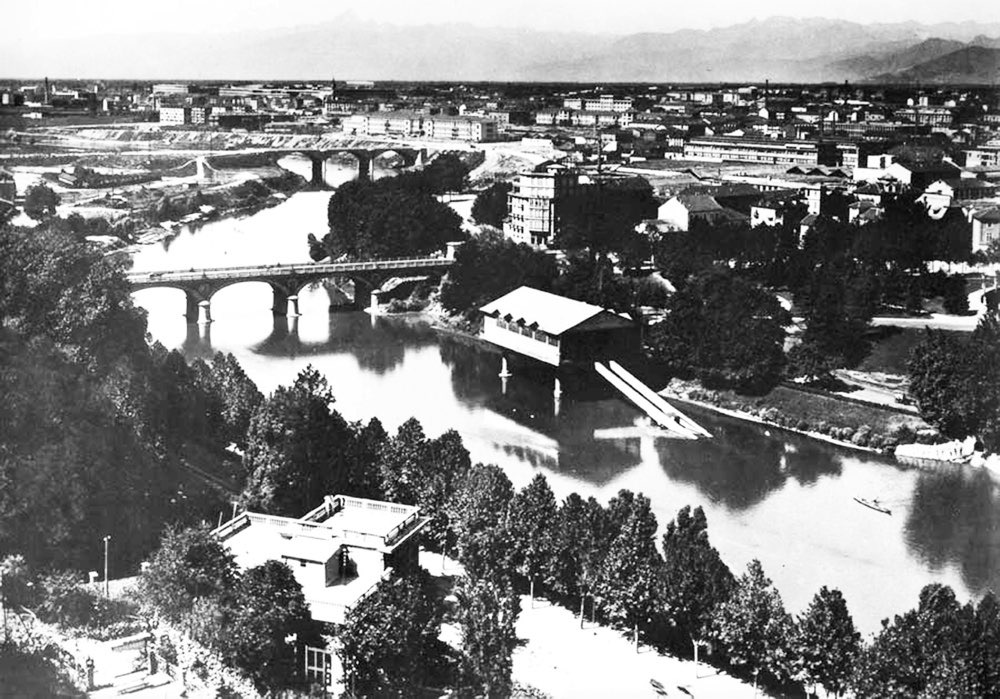 April 1, 1926 is certainly a historic date, not only for the city of Turin, but for Italy itself: it was the day when, on the initiative of the sisa company of Trieste (Italian Society of Air Services) owned by Andrea and Callisto Cosulich, an Italian commercial air service was established with the first regular link between Turin-Pavia-Venice-Trieste by Cant 10 Ter seaplanes built by Cantiere Navale Triestino. 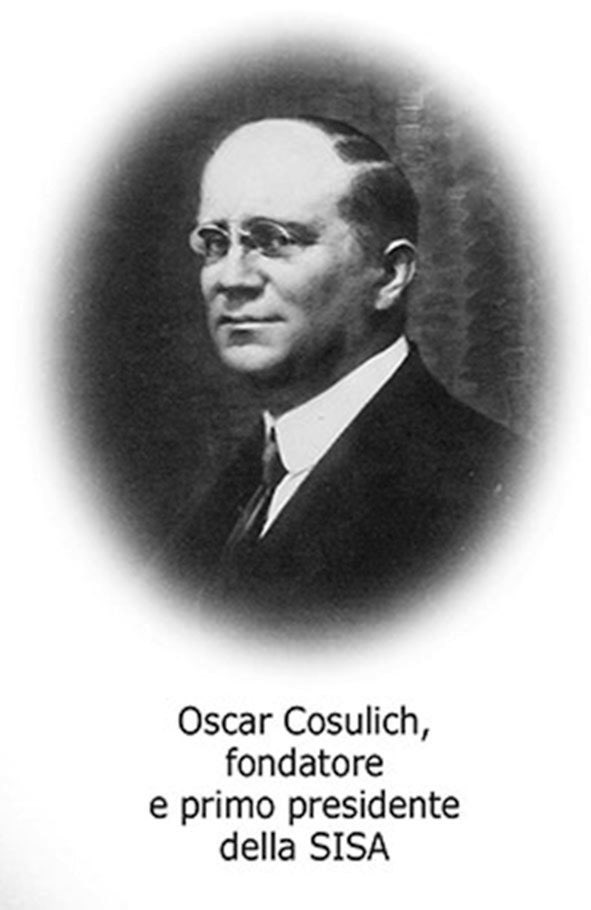 The Cant 10 seaplane, with its FIAT a12 bis, 6-cylinder 300 HP engine, could carry four passengers and two crew members (a pilot and an engineer, sometimes substituted by a second pilot) plus 50 kilos of mail.

A test flight was carried out on March 28, 1926, carrying mail, newspapers and journalists, who were thus the first passengers. 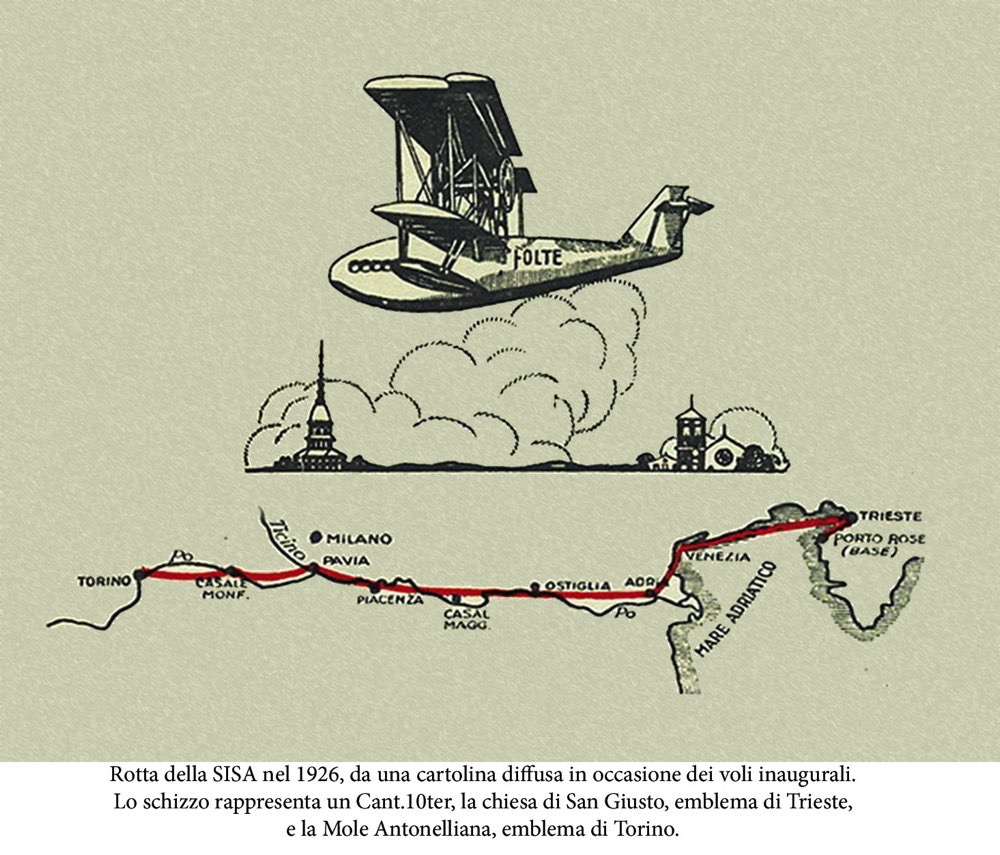 The official inauguration took place on April 1 and was effected by two pairs of seaplanes which departed from Portorose (Trieste) and Turin; the westbound was scheduled to land at Venice (Sant’Andrea hydrobase, now the Lagoon), Pavia while the eastbound aircraft made stops in the opposite direction.

In Turin, the aircraft took off from the River Po, in the stretch between the Isabella bridge and the Umberto bridge. 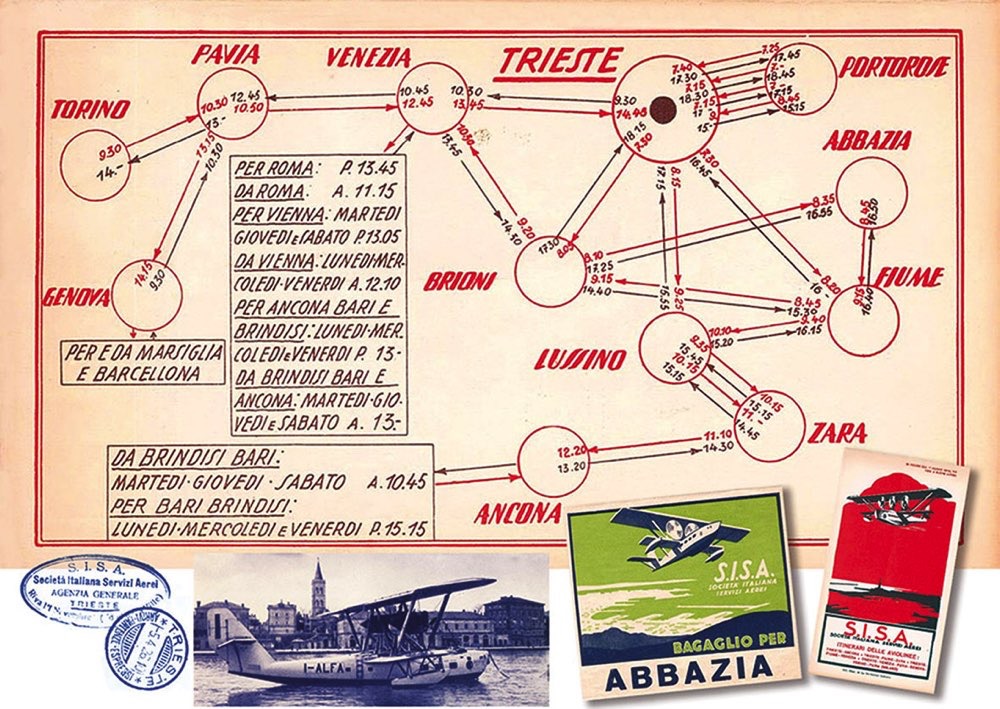 Due to the strong winds of the Bora that were sweeping through the city, the planned departure of the seaplanes from Trieste harbor was abandoned in favor of the nearby Portorose bay.

According to the press, massive crowds had gathered along the Trieste shoreline near the floating hydrobase of the Audace Pier in the San Giorgio basin, but the wind gusting to around 60-70 kilometers per hour made a takeoff manifestly impossible for the two Turin-bound seaplanes.

In the main hall of the Hotel Savoia, Trieste, where most of the authorities from all over Italy were staying, an early-morning meeting was held to decide the best course of action. The possibility of a postponement was never considered, since the good names of Cosulich and Trieste itself were at stake. It was thus decided that the aircraft would take off from Portorose area, protected from the wind by the surrounding hills. 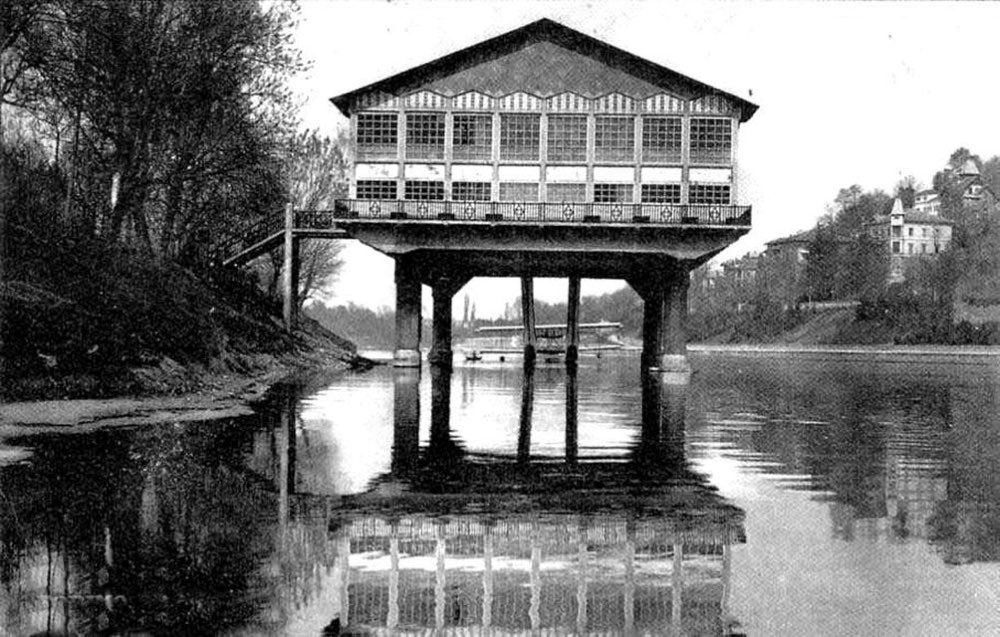 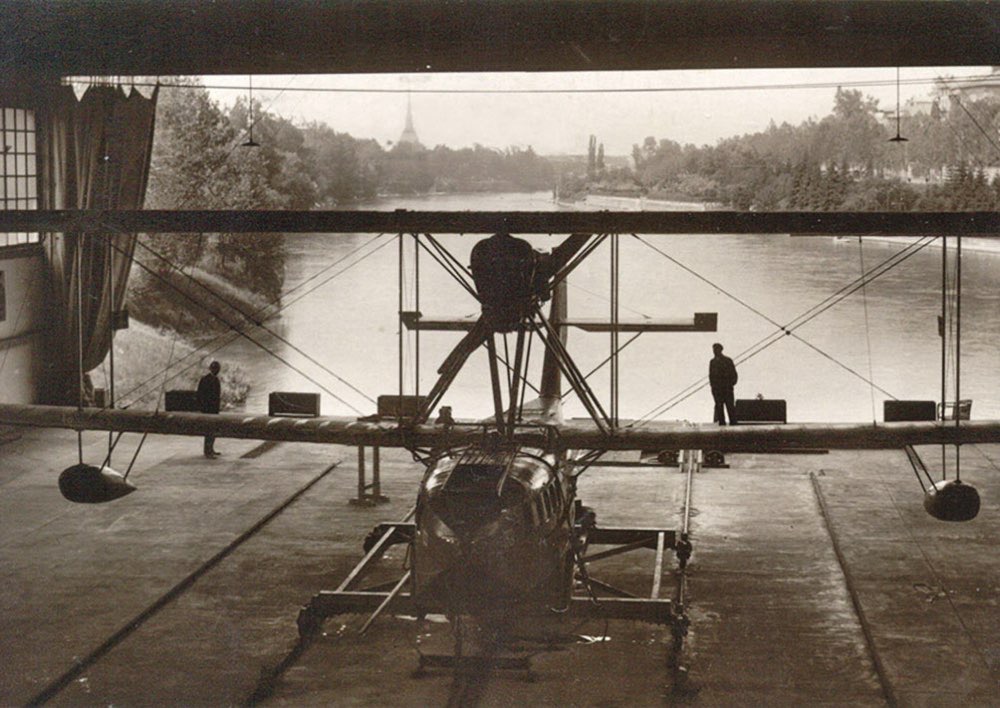 The Cosuliches rapidly organized a fleet of cars in front of the Savoy Hotel and in less than an hour ferried guests and authorities to the hangar of the sisa flying school, near the old Piran shipyard while the people of Trieste, who had come to see the departure, remained disappointed, getting only a view of the sea ruffled by the wind.
At 12,02 the two Cant 10 ter, one piloted by Luigi Maria Ragazzi, the other by Antonio Majorana, took off from Portorose, ushering in the era of scheduled flights in Italia.
One of the aircraft which left from Portorose held Oscar Cosulich, alderman Riccardo Sulligoi Silvani, General Alberto Bonzani with his Adjutant Captain Alberto Briganti, Manlio Molfese (head of the Civil Aviation Office - today enac) and the journalist of the “Il Corriere” Luciano Cavara, while in those from Turin were the journalists Quadrone (La Stampa), Carrara (La Gazzetta del popolo), the assistant Commissioner of the municipality of Turin Attilio Levi and Air Force officers Col. Tacchini, Maj. Lordi and Cap. Cassinelli. The take-off was watched by Senator Giovanni Agnelli and the Special Commissioner of the Turin municipality who sent a personal message of greetings to the then mayor of Trieste, Senator Pitasso. 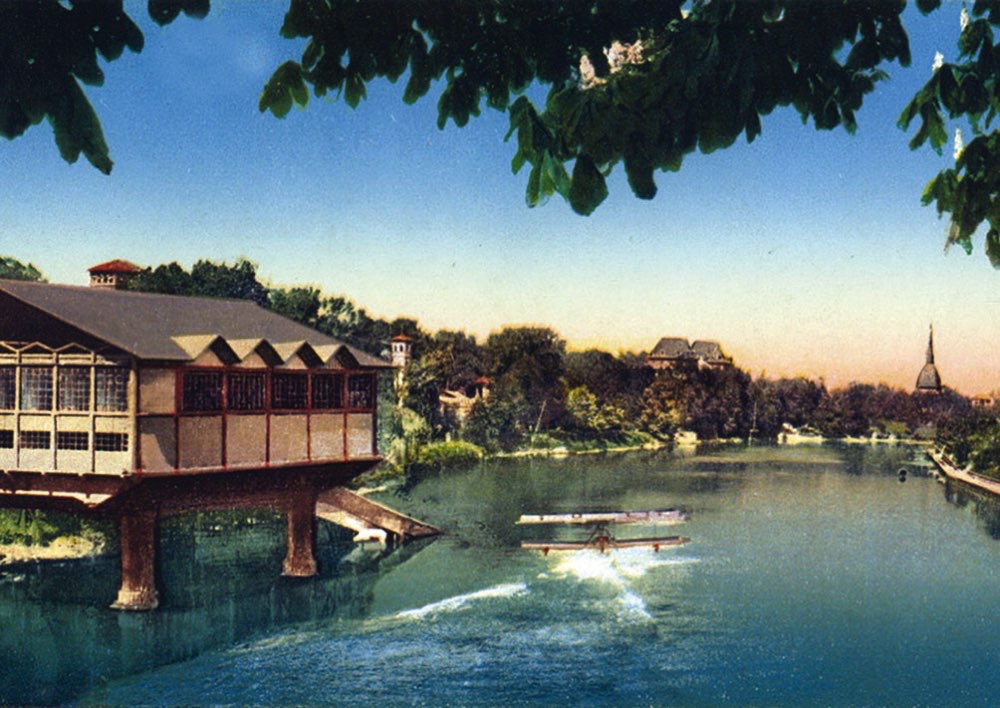 The flight of three and a half hours had a particularly high price for its time: 350-375 lire, equivalent to the cost of a first class train ticket plus the “sleeper” supplement. 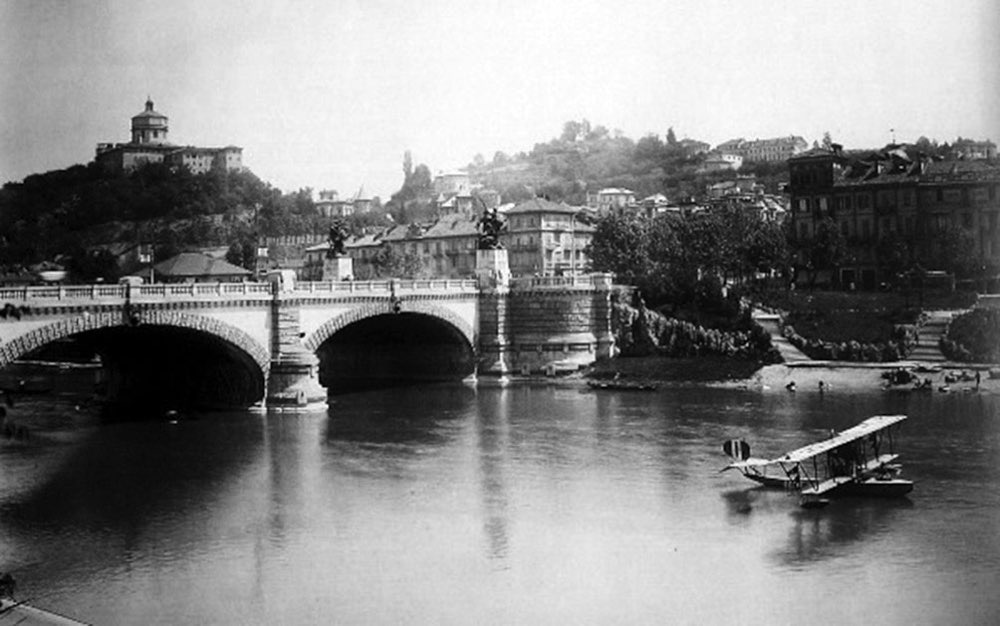 At Pavia, the seaplanes were scheduled to meet on the Ticino, where the official protocol ceremony was attended by the Head of the Government, Benito Mussolini.

The first seaplane from Turin landed on the Ticino at 11.45, followed a few minutes later by the second, while the two seaplanes from Trieste, following their stop in Venice, landed in the early afternoon, at around 3 pm. 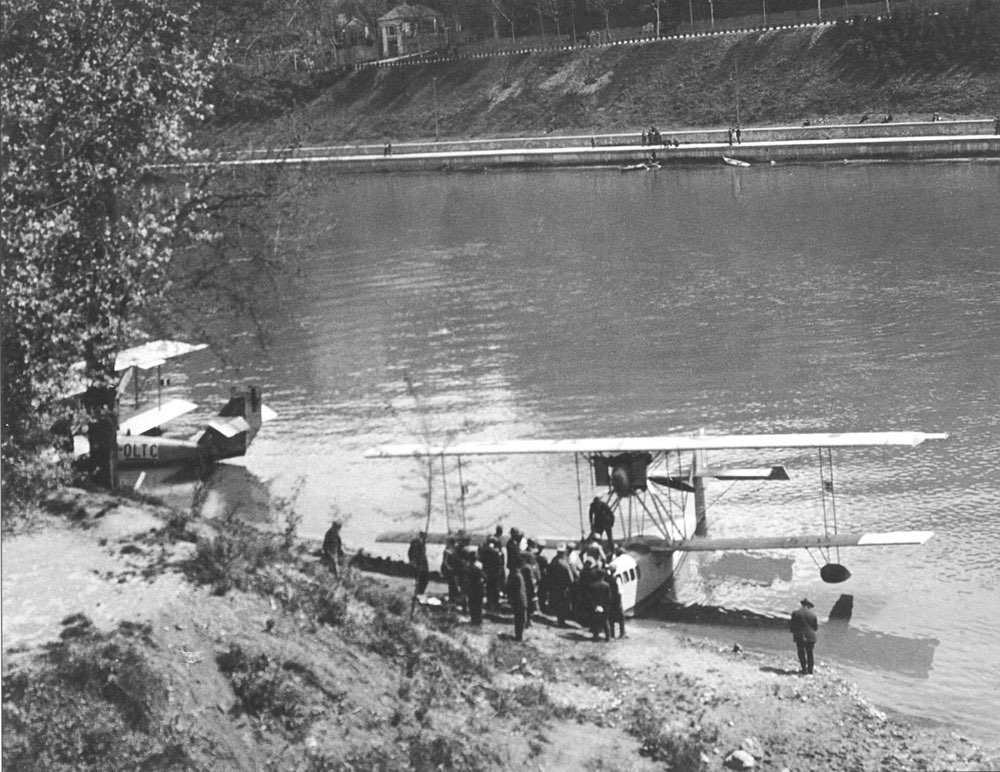 Of the four aircraft, only the one piloted by Ragazzi would complete the entire journey in the day, while Majorana, Ceroni and Pascaletto, plagued by modest technical problems, only completed their journey the following day. However, the result could be considered as a success, and the feasibility of air links had been established, moreover using seaplanes.

Following this inaugural flight, a regular service (three days a week) was established, with synchronized departures - from Turin and Trieste - at 11.00 with landing forecast at 16.10. Each flight included a stop in Pavia and one in Venice, with a stop of about half an hour before taking off for the next stage. 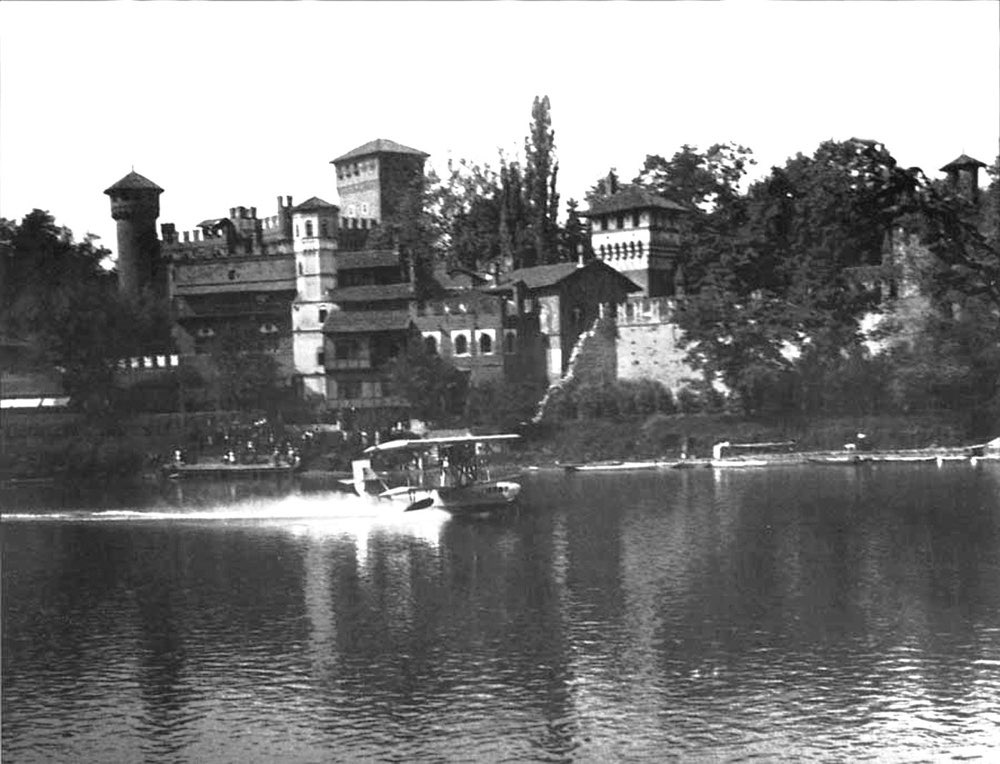 The percentage of successful flights is almost incredible - in its six years of activity, the company attained an amazing 99.42%, demonstrating what can be done with seaplanes operating from water, even without "blind flying" instruments and anti-icing systems.

The route was a complete success – it is sufficient to consider that in the first year only, fully 575 connections were made, for a total of 1589 hours of flight time with 1,588 passengers (the full journey, with stops in Pavia and Venice, lasted about 5 hours). The final totals were for 12,093 journeys, 28,330 hours of flight time and 59,021 passengers. 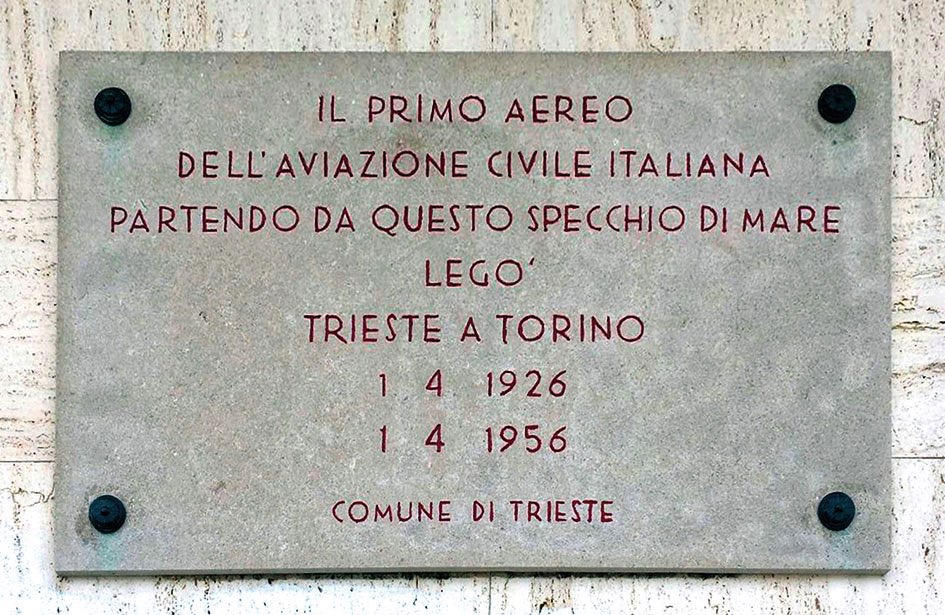 The story of this route is particularly interesting and sufficiently full of episodes to merit being narrated in various books (see “La prima compagnia aerea italiana”, by Carlo d’Agostino and Mario Tomarchio, published by Aviani and Aviani).

This event preceded by a few days the first flight of the sana Company between Genoa, Rome and Naples, which took place on the 7th of April. From the 1st of August of that same year, “Aero Espresso” began the first service between Brindisi and Constantinople. 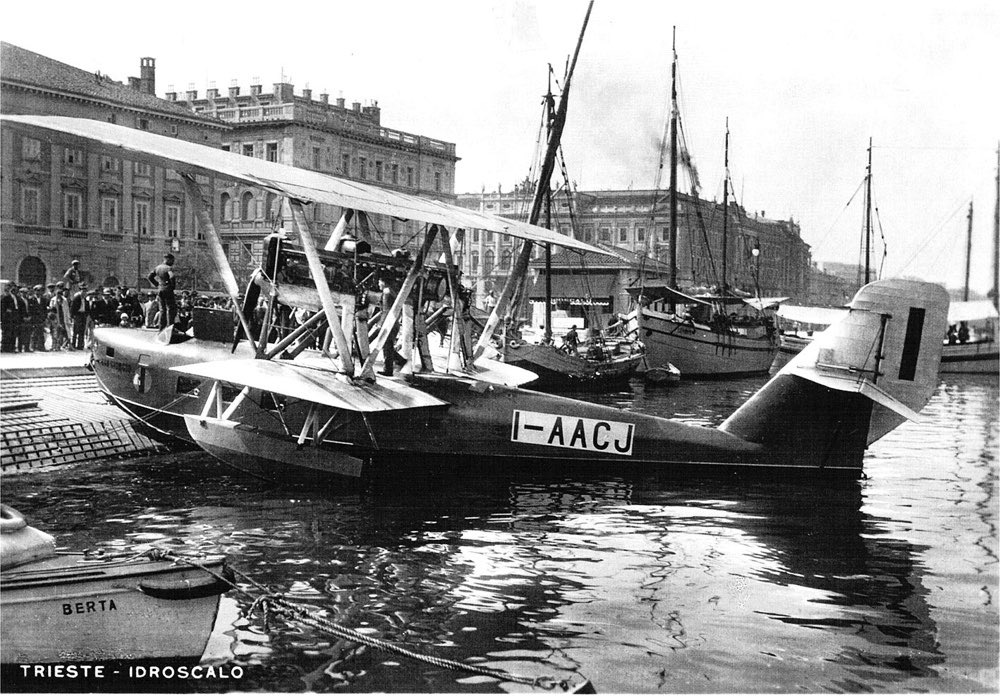 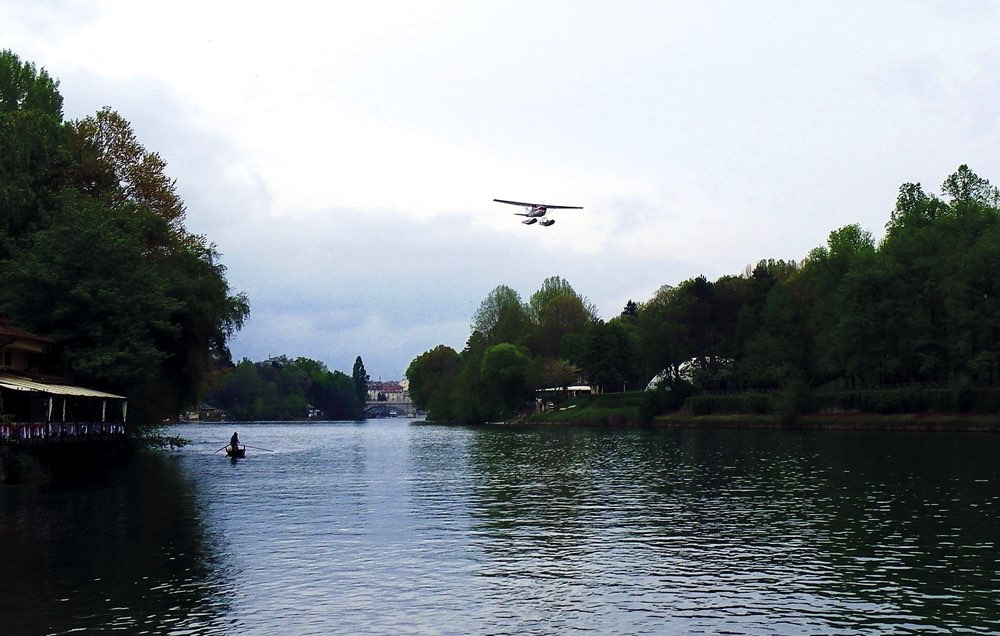